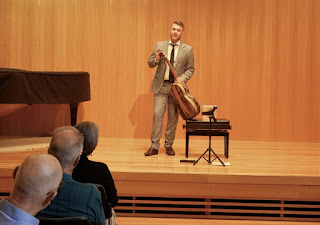 ANCIENT sounds like the guitar and the lute always take a listener back to another time, and even with contemporary music the guitar still holds that connection to the past, but with Matt Withers playing the guitar the sounds are extraordinary no matter what period the music comes from.

In a sold-out concert, with social distancing, the Wesley Music Centre is the perfect place for a solo classical guitar. The sound that Withers creates on his instrument makes that space come alive. Beginning with three pieces by Robert Davidson, the first titled “Twenty Twenty”, was not only a world premiere, but it suggested, as Withers said, to offer a sense of hope and joy, and it did. This quite Australian sounding piece reflected a laid back laconic style.

The following two works, “Daring to Love” and “Forest”, were flowing and mellow pieces, but also fiery at times. They spoke of a composer who knows the guitar well. Three works by Richard Charlton followed. The first, a lullaby, “Berceuse”, which Withers had played several times for his one-year-old son, was a sweet and dreamy piece.

The other two works, one a Tango were full of colour and movement that jumped out at a listener. Australian composer Natalie Nicolas wrote her work “The Shift” in three movements, “The Rain Will Go Away”, “Sunbeam” and “Beyond the Mist”. This too was a world premiere that was commissioned by ABC Classic. It is about “the emotional and psychological struggles of a loved one”. These three movements did not have the richness or fluidity of the previous works, but did show some technical mastery. They felt a little lost in their construction but offered the sound of great potential.

In some of the quieter moments, they were quite special. Local composer Sally Greenaway writes fascinating music. “En Las Sombras”, which translates to “in the shadows”, crossed genres. The playful and tuneful work stood out for its ingenuity and dynamism. It was magnificently played by Withers.

A short standout work by Phillip Houghton titled “Kinkachoo” has become, as Withers said, part of the Australian guitar vernacular. The fullness and beauty of it have rightly seen it become a standalone work.

Finishing off with the smile-inducing “Felicidade” by Tom Jobin, which was arranged by Roland Dyens, is something that Withers loves and so do his many listeners. It sings of joy and happiness in its many bright colours.

This is music that works on every level. Matt Withers is to be commended not just for his inspiring musicianship, but also for his entrepreneurial and promotional skills. He is commissioning a work for guitar from Elena Kats-Chernin right now. This goes along with his bi-annual competition for new classical guitar music.