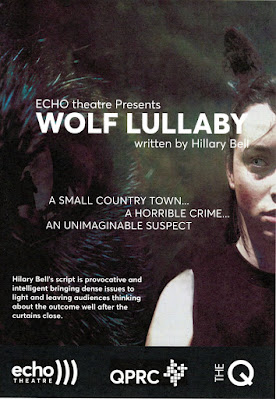 At the very least this is an interesting play to begin our year of vaccination.  There are so many viewpoints to start from.

The policeman, Ray, in some ways is a bit of a plodder: I can almost hear him say, with heavy sarcasm, “That’s a likely story!”  How likely? is a question I have to ask.

Then I must think about Hillary Bell’s intention in making up a story about a nine year old girl’s inner wolf and her parents.  Has Lizzie inherited a dangerous mental state from her mother?  Have Warren and Angela created an evil child through their fractious relationship?  Can we ever know ‘the truth’?  Is the application of criminal law the only way society can respond, if telling lies is truly a natural element of the human condition?

The directing and design of the telling of this story on this stage must be considered in the light of this likely or unlikely child’s tale with its philosophical implications.

Then I might be able to say if this innoculation against the fear of childhood killing has worked.

The set design image which seemed to place most of the action behind the wire of something like a refugee detention centre stirred my questioning.  That central space became Lizzie’s bedroom, the police office, Angela’s living room, the police interrogation room, as well as the remand cell.  Perhaps the image represented the idea that all the people in their different ways were trapped in a chicken-wire cage, including Angela and her daughter because of their psychological conditions; Ray as he had to interrogate only according to the book; even the dead child Toby was in there behind the community’s commemoration flowers and poems placed outside the wire.

But apparently not Warren who was so often, conveniently, ‘on shift’, to pay for Angela’s and his separate rents, or when it was the weekend – the court-order time when his daughter stayed at his place – and the parents’ arguments took place in open space around the central raised set as if in the street where the children’s hopscotch pitch was laid out.  On the sides, left and right, words about murder were projected, becoming meaningful later as Ray’s interrogation ‘progressed’ and Lizzie’s parents worked out what their daughter might have done.

This set, combined with an ominous background sound track of children’s apocryphal skipping rhymes, disturbed me in two different ways.

First, as I suppose on reflection I was meant to feel, it all seemed to be an omen of doom.

But I also felt there was a mismatch between this use of symbolic image and space and the seemingly naturalistic presentation of the characters.  Rachel Pengilly played her nine-year-old Lizzie so realistically that I found myself worrying that such a young actor was being allowed to play such psychological trauma – only to find when reading the program after the show that she is old enough to have a BA degree from University of New England.

Craig Alexander’s Ray, again naturalistically, played out the policeman’s conflict of feelings towards this local young girl, whose family he knew: he had unbending evidence-gathering rules to follow, while feeling at times sympathetic in a kindly adult way towards Lizzie’s telling lies, as well as feeling stressed by the frustration of not being able to extract the truth.

Similarly, the coming together and blowing apart episodes in Angela and Warren’s feelings about each other were realistic and very uncomfortable to watch.

After overnight reflection, I wonder if the set design, still without any need to set-change from short scene to short scene, would have been better if it represented a plain bland small room with a small desk, a chair and single bed, in which the naturalistic acting would feel normal instead of somehow out-of-place in the chicken-wire setting.

By amazing coincidence, the image I have in mind appeared in Canberra’s CityNews on the very day of Wolf Lullaby’s opening night.  In a highly unlikely story, a significant artist, Melissa Beowulf, has painted “Cottage Room” 2018, representing the room in which she was held in remand at the Alexander Maconochie Centre for 14 months on a charge of murder (acquitted at her trial). [https://citynews.com.au/2021/digital-edition-february-18/  Page 28 in “Effects of injustice linger for ‘powerless’ painter” by arts editor Helen Musa]

The surround-sound of children’s rhymes would still make the point, and make us feel concerned about the violence inherent in many nursery rhymes.  The words that Lizzie supposedly wrote might have been better projected above the stage, rather as Tennessee Williams did in The Glass Menagerie.  A photo of the flowers and poems for Toby could be projected perhaps on the room window, as if on TV news, when the adults in the dialogue become aware of what Lizzie had written, and her words could appear as if the news camera had zoomed in.

Perhaps my reaction seems a bit old-fashioned, but I think the playscript and our need to come to grips with the truth of the story is unsettling in itself.  The mismatch in the set design was an extra layer which disturbed my focus on the characters and the implications of their experience, though the directing and performance in the acting was excellent.

In other words, Echo Theatre’s presentation of Hilary Bell’s Wolf Lullaby at The Q, Queanbeyan is an interesting production indeed.  Innoculation is advisable.