Home at the End by Duncan Ley 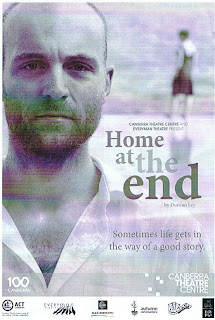 Duncan Ley likes to explore the psychological effects arising from a very specific situation.  You’ll surely remember the interrogation in his In Cold Light (soon to be a feature film) with its unexpected twists and turns creating the effect of a mystery drama.  We search to find out what is happening, and why.

In Home at the End, Act 1 ends with a sudden and completely unexpected horrific event.  I even wondered if this was the end of the play, but as others obviously more in the know on opening night wandered off to the bar for interval, I then had to wonder what on earth could happen next.

Because the play is a mystery I should not reveal just what does happen, except to say that the title means what it says.  The character, Joe Smith, who we realise in the second half is the central figure in the drama, does come home, at the end.  But it took me considerable time and analysis afterwards to work out what should be understood to be the theme of the play.

Apart from the question of the limitations of my intellect, does this mean that the play is a success or not?  I mentioned In Cold Light because that play ran for just 90 minutes, was absolutely tightly focussed, and made us understand, and even empathise with, the Inspector – the interrogator, who is as much trapped in the situation as the victim.

Home at the End runs for almost two and a half hours, not including interval.  Soon after Act 2 got under way I realised what the ending might be – and I was right.  But this meant that a great deal of Act 2 could have been trimmed, as well as some of Act 1, so that the drama’s momentum, already at a high point at the end of Act 1, would be better maintained – either to an inevitable end (which I saw coming), or a surprise end, which would need a reworking of Joe’s psychological development in Act 2.  He would need to be apparently coping much better with the trauma of his experience at the end of Act 1, but lose it against our expectations when his (at this point imaginary) wife Andrea sings her final song and fades away.

What the play is about is the experience of traumatic stress.  What can we expect a person to do at the dreadful moment of absolute threat?  Like any animal, and we are only a species of animal after all, will it be fight or flight?  Does a person, in this moment, have any control over their response?  I think Ley says, no.

The response to such fear, especially as in his play when the horrific event is completely unexpected by the character, Joe – and by us in the audience – is entirely instinctive.  Can, then, the person be blamed if he flees to save himself, when he might have fought back, at least yelling out a warning to others, or attacking the danger even at the risk of losing his own life?

It is this issue which is played out in the attempts to treat Joe’s traumatic stress disorder through group therapy and psychological counselling in Act 2.  Can treatment of this kind be successful?  I think again, Ley says not really.  “Home” at the end, for this person, Joe, is no kind of comfortable resolution.  It’s just an escape into pathological story-telling.

At this point, the impact of the play broadens.  Joe is (or was before the trauma) a writer.  Does Ley suggest that to be a writer is to be escaping into story-telling?  In his case certainly not pathological, even if in this play a bit long-winded.  Traumatic Stress Disorder is now such an issue in the world that TSD is a label in its own right, and counselling is seen as a necessary part of help for anyone faced with the kind of experience that Joe has.  The issue, and therefore this story, is important.

Putting this story on stage, and with excellent performances from all the cast – Isaac Reilly as Joe, Helen McFarlane as Andrea, Amy Dunham and her unusual puppet as their 6-year-old daughter Molly, with Jordan Best, Geoffrey Borny, Laura Dawson, Duncan Driver, Alice Ferguson, Will Huang, and Chris Zuber playing all the other roles (including quite fascinating commedia dell’arte characters) – makes for a very worthwhile theatre experience.  Highly recommended.


Posted by Canberra Critics Circle at 10:12 AM