THE BOOK OF EVERYTHING 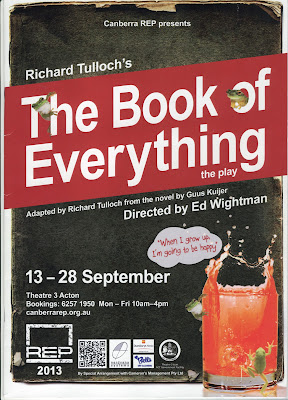 Adapted by Richard Tulloch from the novel by Guus Kuijer
Directed by Ed Wightman
Canberra REP at Theatre 3, 13 - 28 September 2013

Canberra Rep’s, ‘The Book Of Everything’, is a winner in every way.  Adapted by Richard Tulloch from the novel by Guus Kuijer, it tells the story of a family in 1951 in Holland who are violently abused by their religious but well-meaning father and husband.  That sounds like a pretty heavy night at the theatre, but the story is told from the point of view of an imaginative 10 year old family member, Thomas, in his diary.  His take on what is happening around him is hilarious and ultimately uplifting.

At the centre of this production is Lachlan Ruffy who gives a remarkable performance as Thomas.  Adults playing children often seem forced and exaggerated but Lachlan Ruffy creates theatrical magic here as an utterly believable 10 year old, even though he is obviously much older.  He has great support from the rest of the cast who all give excellent performances.

Jerry Hearn is chilling as the abusive father, but the depth of his performance draws sympathy from the audience by the end of the play.  Lainie Hart plays Thomas’s mother with great warmth towards her children as well as expertly showing the terror of living with a man who can turn abusive at any moment.  Helen Vaughan-Roberts as next door neighbour, Mrs Amersfoort, is both hilarious and moving as a woman reputed to be a witch but who has Thomas’s best interests at heart.  Madeline Kennedy gives a winning performance as Thomas’s sister and Liz de Totth as their jolly aunt is especially effective at the moment she discovers the abuse that’s been hidden under her nose all along.  Tamina Koehne-Drube as Thomas’s young girlfriend is also very effective playing a sunny child tentatively approaching womanhood.  Then there’s Miles Thompson in the surprise performance of the night as Jesus Christ.  As conjured up in the mind of Thomas, this is a Jesus you won’t find in religious texts.  Miles expertly captures a child’s unique vision of Jesus and has a field day playing him.

Andrew Kay has done it again with a superb and quirky set that is functional but with a child’s imagination in its detail.  Lighting design by Chris Ellyard, sound design by Neil McRitchie and music composed by Jonathan McFeat complement the set and the play perfectly.

At the end of the opening night performance, the audience demanded a second curtain call, something I can’t recall seeing at Canberra Rep before.