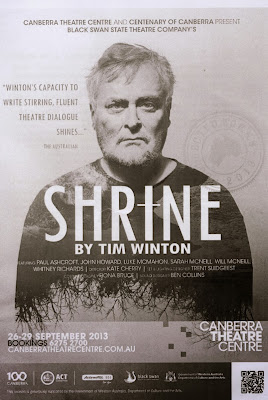 ‘You can’t judge a person by their death’.  Tim Winton’s play, Shrine’, takes us on a harrowing journey where we do just that.  Examining the impact on the parents of the car crash death of their teenage son and the reactions, loyalties and lies of others involved in the tragedy, the play packs an emotional wallop.

As in his novels, Tim Winton’s insight into the Australian character is remarkable.  These characters are so recognisably real that it’s impossible not to be drawn deeply into the drama.

There are excellent performances from all six cast members.  John Howard commands the stage as the embittered, cynical and deeply wounded father.  Sarah McNeill, as his wife, is outstanding as the mother who is suffering in silence and unable to come to terms with the loss of her son.  Her breakdown at the funeral is alarming and confronting.  Paul Ashcroft, appearing in flashbacks, gives a very effective portrayal of a teenager full of life and dreams before that life is tragically cut short and Luke McMahon and Will McNeill give strong performances as the two mates involved in the car accident who may or may not be telling the truth.  Whitney Richards as the young girl who knows a lot about the son’s last hours, gives a moving performance of great depth and sincerity.

The set and lighting design by Trent Suidgeest is imaginative and wonderful to look at as well as working superbly for the drama.  Sound designer, Ben Collins, has produced an eerie, threatening soundscape that works brilliantly with the set and lighting.  The costumes by Fiona Bruce are perfect choices for each of the characters.

Director, Kate Cherry, has done a superb job.  For a story that could be just too dark to enjoy, she has created a world of theatre that excites our imagination, involves us with very real characters and leaves us with a feeling that we’ve seen something very special.

Produced by Western Australia’s Black Swan State Theatre Company, we are privileged to be able to see this outstanding production here as part of the Canberra Centenary celebrations.  When you see a play as well written, directed, designed and performed as this one, you know that this is why you go to the theatre.