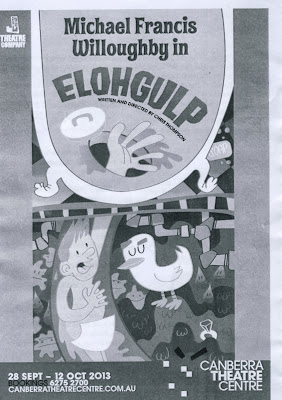 Ever wondered what to say when your child asks what goes on down there below the plughole?  Jigsaw Theatre Company’s, “Michael Francis Willoughby in ELOHGULP”, answers that question and more as it takes us on a journey into the world of ELOHGULP.

Written and directed by Chris Thompson, the fun starts at the door of the theatre.  Audience members actually have to go down the plughole and around a bend in the pipe, finding themselves in a spooky subterranean world of strange, colourful lighting, foggy shadows, funny noises and crazy adventure.


Set design by David Hope is a beauty with strange and wonderful creatures hanging from the ceiling and oozing out of pipes.  It is complemented by great sound effects by Ian Blake and atmospheric lighting by Alister Emerson.  The catchy music was composed by the always inventive John Shortis.


Several of the characters in the show are imaginatively designed puppets which come to life in the masterful hands and voices of actors and puppeteers, Barb Barnett, Raoul Craemer and Caroline Simone O’Brien.


The show seemed a bit slow to get started but when Craig Alexander appeared as Michael Francis Willoughby, his energy and pace quickly engaged the children in the audience in the adventure.


Chris Thompson has written and directed a highly imaginative children’s show.  It is sure to appeal to the under 10’s.  Lessons to be learnt from the adventure were put over mildly but effectively.  It was a pretty enjoyable show for this big kid, too.

Posted by Canberra Critics Circle at 10:19 AM