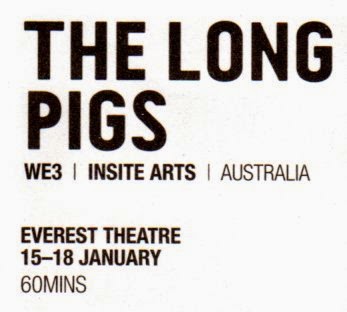 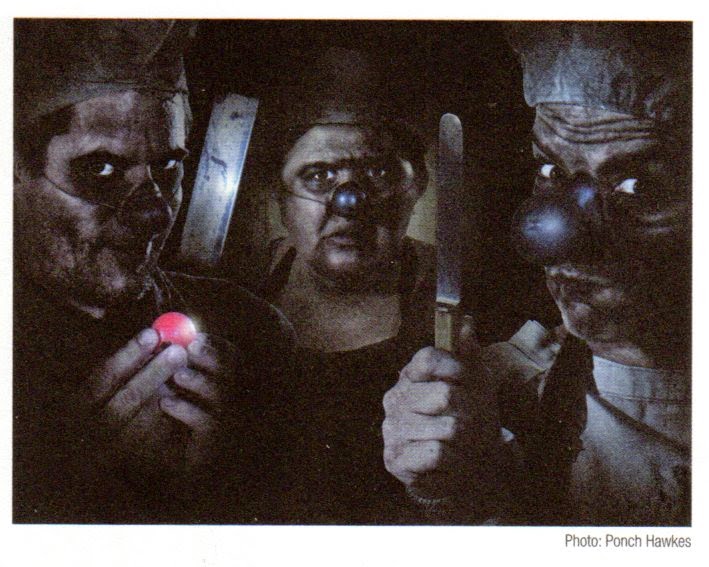 Whatever you do in your life, make sure you avoid the black-nosed clowns.  It got quite scary when these three realised they were one red nose short and were clearly expecting to find one in the audience and chop it off.

We3 must have had a wonderful time putting together the enormous complexity of their set, as well as the characters of their clowns: the fat bossy one, the short one who regularly stuffs things up, and the tall somewhat lugubrious and rather naïve one who at one stage was nailed to a cross.  When he discovered that the nails didn’t actually go through his hands, he quite naturally exclaimed “Jesus!!”

By this time it was clear that these were anti-clowns.  After the recent ideological murders in Sydney and Paris, it struck me that this parody of Christ might have had serious consequences if they had chosen to parody Mahomet.

As it turns out, the short clown is a ring-in – beneath the surface his black nose is actually red, so it is duly chopped off.  When he is forced to eat his own nose (that’s where the cannibalism implied in the “long pigs” title comes in), red noses rain from the heavens, and the black-nosed clowns have won the day.

The message is that extremist ideology taken to its logical conclusion is a real danger.  Yet we laugh at the clowns, and even applaud, while watching it all happen.  The fact that this show must have been devised long before the Sydney and Paris murders shows the prescience of We3’s work.

And, indeed, it is great fun to watch.  And interesting to note that the clowns are all represented as male, while two of the performers are female.  I think this says something about who controls the extremist view of the world.

It’s not a pretty sight, but the gruesome story is well worth seeing.  You will surely laugh, in a black-nosed kind of way.