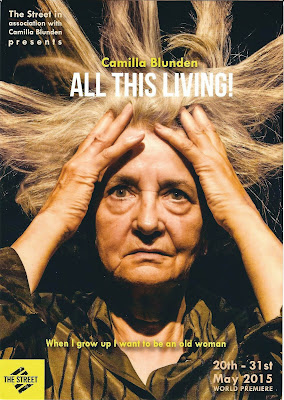 Written and performed by Camilla Blunden
Directed by Rochelle Whyte
The Street Theatre to 31 May, 2015

Actress, Camilla Blunden, states in the program for her show, ‘All This Living’, that she ‘wanted to put the older woman centre stage, bring her out of the shadows’.  This charismatic actress performs the work very well but the work itself is unsatisfying.

In the show, Joy is an ageing woman who feels invisible in society and sets out to investigate what this ‘third stage’ of life is.  She starts with a description of the negative way she feels she is treated as an older woman and moves on to considering how she can retain her identity with dignity and confidence as a unique person, not just an invisible old lady.

It’s nicely written in a poetic style but it demands intense concentration by the audience.  It plays as a distillation of ideas, memories, experiences and intelligent musings and on that level is quite interesting.  Where it doesn’t work so well is in the content.  We learn what’s in the woman’s mind but we want more detail of her personal experiences to be able to care about her.  As it plays at the moment, it’s a bit uninvolving.  Also, a play asking us to examine and think about an issue like this needs a few revelations.  We didn’t hear anything about women’s experiences here that we didn’t know already.

The direction of the show by Rochelle Whyte was imaginative and it was played at a nice pace.  The atmospheric sound design by Kimmo Vernonnen mostly worked well but there seemed to be some miscues with voice-overs on opening night and the slight background babble of voices during the show was distracting.  More restrained use of this would make the point just as well.  Imogen Keen’s design for the show was deceptively simple with a clever use of props.  However, some of the reasons for their use were a bit obscure as was the costume worn for most of the play by the actress.  Lighting by Gillian Schwab was excellent.

There’s a really good idea for a play here and it has an actress who can command the stage on her own.  As it plays at the moment, it’s a short 45 minute piece.  Expanded into a more involving human experience, it could be a real winner.

Posted by Canberra Critics Circle at 8:13 AM