FROM RUSSIA (AND NEW ZEALAND) WITH LOVE 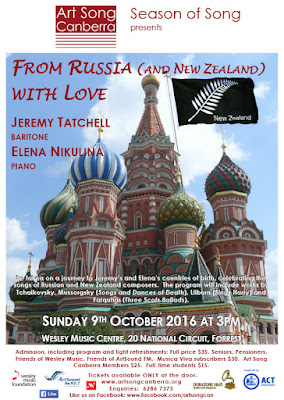 ‘From Russia (and New Zealand) with Love’ was a clever title for this Art Song Canberra concert, given the New Zealand origins of baritone, Jeremy Tatchell, and Ukraine’s pianist, Elena Nikulina.  It also gave the pair the opportunity to sing and play very contrasting music from their birth countries.

The first half of the program was devoted to works with a New Zealand background, showcasing songs by David Farquhar and Douglas Lilburn.  ‘Five Songs of E.E. Cummings’ were charming, uniquely worded poems with music by David Farquhar that was edgy, spare and unique in its own way.  Jeremy Tatchell sang these with great confidence and skill, especially ‘O by the by’ and ‘when faces called flowers float out of the ground’.  The accompaniment by Elena Nikulina was very well played.  ‘Three Scots Ballads’ also set to music by David Farquhar were a complete contrast to the E.E. Cummings songs and Tatchell and Nikulina gave excellent performances of these stirring and haunting songs.

‘Sings Harry’ with music by Douglas Lilburn based on poems by Denis Glover is a work requiring strong character singing with reflective sections contrasting with moments of robust, almost swaggering delivery.  Tatchell was able to show the full dimension of his fine voice and acting ability with these songs.

After interval, the focus was on works of the Russians, Mussorgsky and Tchaikovsky.  Singing in Russian, Jeremy Tatchell performed Mussorgsky’s ‘Songs And Dances of Death’ with great expertise.  His strong baritone voice was a perfect match for the unique Russian sound of this music.  Elena Nikulina played the accompaniment with great accuracy and feeling.  The ‘Six Romances’ of Tchaikovsky included three poems of Tolstoy and were highly emotional pieces sung with great clarity and warmth by Tatchell accompanied by beautiful, sensitive playing by Nikulina.

This review was first published in the Canberra City News digital edition of Monday 10 October.  Len Power’s reviews can also be heard on Artsound FM 92.7 ‘Artcetera’ program from 9.00am on Saturdays.
Posted by Canberra Critics Circle at 10:53 AM