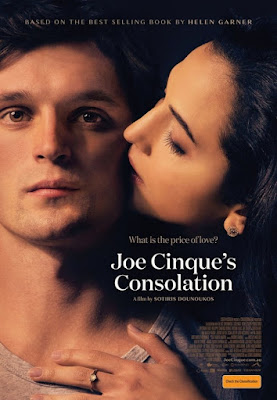 As stories go, the story of Joe Cinque is at the very least alarming. A young Canberra man who was guilty of nothing more than an excess of loving tolerance towards his live-in girlfriend, and it cost him his life.

The end of their affair is a cautionary tale, a revelation of the dangers that are inherent in taking too much responsibility for others, as Cinque did for his loved one’s health and wellbeing. It reveals at the same time the dangers of community taking too little.

Were Joe Cinque’s Consolation not based on a true story, we might dismiss it as another dark chapter of suburban malaise, a toxic mix of the bizarre and the banal. If only it were not true.

This first feature from Sotiris Dounoukos, a graduate in law turned filmmaker who was studying in Canberra at the time of Cinque’s death in 1997, is a principled exploration of events leading up to the night he was killed. Dounoukos and his team, including co-writer Matt Rubinstein, have been brave to tackle this daunting project from the recent past with many stakeholders, including the families of principal characters, who are still very much alive.

There is much to praise here. The screenplay by Dounoukos and Matt Rubinstein, that sounds pitch perfect. The performances are uniformly really good, especially Maggie Naouri's take on Anu Singh, by far the most complex role in the film. The direction is restrained yet skilful, negotiating the many shoals on which melodrama so often founders. Overall, the film is a credit to all involved, including the young actors, who besides Naouri, are relative unknowns.

In addition to the challenge of providing a portrayal of Singh, the law student who injected Cinque with lethal doses of heroin after she had rendered him comatose with a potent sedative, the film explores the vexed question of responsibility. There were people who were aware, like Madhavi Rao, Singh’s close friend, of plans afoot, or just vaguely aware,. There were dinner party guests, there were dealers, there were enablers. Were they somehow in thrall to Singh? Did they ever imagine that events could transpire as they did? Community duty of care is one of the key questions the film puts to its audience.

While it is difficult to see the film as an adaptation of Garner’s work, to which Dounoukos was granted the rights, film and book are certainly complementary and can be experienced back-to-back. The film version of events leading up to the death can then be followed by Garner’s personal account of the court proceedings that dealt with it.

There are sensitivities and pitfalls aplenty to manage, but Joe Cinque’s Consolation emerges as a very fine film indeed. It is nuanced, respectful, subtle and it makes the inexorable progress towards a death foretold really powerful.

It shows how it was possible for Cinque to die in the way that he did, answering my first question. My second question relates to the way it was dealt with in court, but that remains unanswered.

I became a resident of Canberra in the same year that this 26-year-old engineer died. It was the same year that the implosion of the Canberra Hospital took place, another bizarre event that is incidentally referenced in the film as well. The city of Canberra and its environs are revealed in the many location stills interspersed through the tightly observed drama. These shots open it out, asking how a city could carry on regardless as a young man lay dying. It is something we can all ask ourselves.

Although it inevitably shares space on the big screen with chick flicks and the domestic noirs with femme fatales now in vogue, Joe Cinque’s Consolation, is never in any danger of being trivialized by the demands of entertainment.  It is too serious and intelligent and nuanced for that.