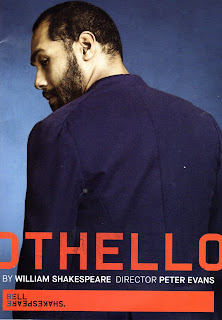 I had some difficulty seeing this performance by virtue of the fact that the raking of the seating in the Canberra Playhouse is at far too shallow an angle.  It only took a normal height couple immediately in front of me to mean that I had to keep shifting from left to right, and when I wanted to concentrate closely, shifting forward to the edge of my seat to see the actors on different parts of the stage.

Maybe it’s Row F where the problem is worst.  I hope I didn’t distract the people behind me too much.

Row F, I think, is perhaps also the worst for acoustics.  I’ve been further forward and further back before, but in the middle the sound seems to be especially muzzy.  Perhaps that was why I found it quite difficult to pick up all the words, especially when spoken fast (such as in Scene 1 when you need to hear Iago and Roderigo to get the detail of their complaints and their financial arrangements which underpin the rest of the action), and in general of the men compared with the women.

Being aware of these technical issues and doing my best to discount them in my judgement, I still have to use the word “lacklustre” to describe this production of Othello.

This is disappointing after Peter Evans’ Romeo and Juliet.  His modernisation worked then, despite the anachronisms, because the central story is still universal to today’s families and their children; but not for Othello.

Shakespeare’s characterisation of the Moor demanded that he be so strategic in war, so compelling a commander and so attractive in love – indeed, so genuine a personality – that his blackness simply has to be put aside, despite white Venice’s standard discriminatory assumptions.   Othello is highly intelligent, working through the detail of information he receives to see the possibilities and probabilities, and taking decisive action.  Of course, though Shakespeare’s audience in a time of absolute monarchy would recognise the value of such a man – and pick up on Shakespeare’s point that these characteristics are not exclusive to  Englishmen (or white Venetians) – it is his tragedy not to see through the subtlety of Iago’s manipulative intelligence.

Unfortunately, neither Ray Chong Nee nor Yalin Ozucelik showed us the complexity of these characters – presumably because they were not directed to do so.  Chong Nee’s Othello seemed too limited in intelligence, commanding presence or personal charm, and indeed was represented as actually being mentally unstable; while Ozucelik’s Iago was clever to an extent at a superficial level but was never the smooth operator – not oily enough to succeed against a man of Othello’s erudition; or indeed even enough to explain how Emilia would ever have married him.

One demonstrative example was when Iago turned on Emilia, threatening violence, insulting her as a ‘fool’, and obviously frightening her.  The real Iago (and they are extant today as ever they were in Shakespeare’s time) would never be so obvious.  They smile as they call their wives fool, just as they speak so apparently genuinely while taking their ‘mates’ down.  This Iago actually made some audience members laugh openly when speaking directly to us, when we should have felt the need to stop ourselves from laughing because of his dreadful intention.

Though all three women, as Emilia, Desdemona and Bianca, performed their roles with tremendous strength of character – and thoroughly justified Shakespeare’s insistence on their equal rights – without properly fine-tuned male characters, their work was not enough to bring this production of Othello up to Shakespeare’s mark.

I suspect that attempting to use modern dress (which lacks the specific delineation of social position) and technology to create massive alarums was a distraction in the directing of this play.  Its setting is so specific (where Othello even speaks of his action in Aleppo!) that keeping to the time and place that Shakespeare chose would work better, allowing the characterisations to grow from those circumstances and yet making the story of Venetian domination and its undermining from within be told metaphorically via the ironic tragic story of the Moor, Othello, his pure Venetian wife Desdemona, and his disaffected underling Iago.