Barbara and the Camp Dogs - Belvoir 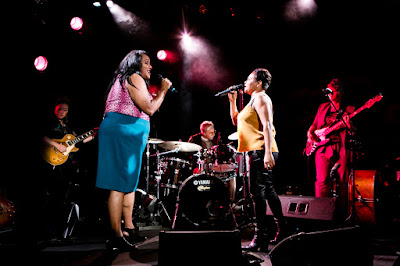 Barbara and the Camp Dogs is an outback rage against the machine, a rock concert where personal tragedy blurs into political injustice.

With story and music by Ursula Yovich and Alana Valentine, this original musical explores the lives of Indigenous cousin-sisters Barbara (Ursula Yovich) and Rene (Elaine Crombie), a pair of talented and feisty singers who play to casinos and pubs.

With the woman who was mother to them both ailing, they embark on a pilgrimage to distant Katherine to exorcise their family ghosts.

This is a story about Barbara’s anger. Barbara is tetchy and self-destructive, both because of a cruel family history and the everyday humiliations of an Indigenous woman in Australia. When Barbara does something outrageous, like punching a racist at her sister's gig, we have perfect sympathy: the world is more to blame than she is.

While anger and grief are key themes, Barbara and Rene are always lively company. In one entertaining sequence, the duo twirl into saris for a cruise ship gig from an Indian tycoon. Whether squeezed together on a bouncing motorbike or having it out in a hotel room, the pair give performances that are fresh, authentic, and alive.

As directed by Leticia Caceres, this could be mistaken for a concert, with the Camp Dogs band (Jessica Dunn, Sorcha Albuquerque, Michelle Vincent) dominating the stage, and audience seated on the stage recruited into the show in a style similar to Belvoir’s production of Calamity Jane.

The music is soulful, passionate but with a rock flair. Chalk scrawl on the wall gave the vibe that we had caught the end of a gig in a pub in the middle of nowhere.

Barbara and the Camp Dogs is an intense experience, delving into extremes of pain and grief, but never letting go of life and humour. When the sisters sing to each other, we learn that at the end of anger, there is a love song.