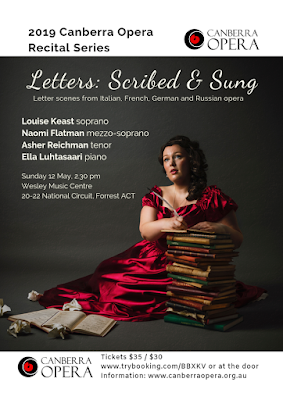 There are many well-known arias and scenes from opera in which letters are written or received, so it was an inspiring idea to present a collection of these in a recital.

Louise Keast is no stranger to Canberra audiences having been resident here for some time before moving to regional Victoria.  She will make her international debut in Sicily in June as Donna Elvira in Mozart’s Don Giovanni.

Swiss born mezzo soprano, Naomi Flatman, is a graduate of the Queensland Conservatorium Griffith University and current studio artist with Gertrude Opera Studio in Melbourne.  Tenor, Asher Reichman, is from Melbourne and has performed with the Australian International Opera Company, XL Arts Inc. and the MSO chorus.

The singers were accompanied on piano by Ella Luhtasaari from Canberra who has performed with the Handel in the Theatre opera company as well as in numerous recitals in the Canberra region.

Naomi Flatman sang a very fine ‘My heart opens to your voice’ from Samson and Delilah by Saint-Saёns and her performance of the Habanera from Bizet’s Carmen showed that she is a strong actress as well as a fine singer.  She also gave a moving performance of Charlotte’s letter scene from Massenet’s Werther.

Federico’s Lament from Cilea’s L’arlesiana was an excellent choice for Asher Reichman who gave a strong singing and acting performance in this scene.  He also sang a warm and touching ‘Tell me about my mother’ from Bizet’s Carmen in duet with Louise Keast.

In addition, Naomi Flatman and Louise Keast sang three duets in this recital very well.  The most memorable, and an excellent choice for the recital’s finale, was the very well-known Flower Duet from Lakme by Delibes.

The accompaniment for the singers by Ella Luhtasaari on piano was excellent throughout this enjoyable recital.

This review was first published in the Canberra City News digital edition of 13 May 2019.

Len Power’s reviews are also broadcast on the Artsound FM 92.7 ‘In the Foyer’ program on Mondays and Wednesdays at 3.30pm.
Posted by Canberra Critics Circle at 10:23 AM