THE WORLD GOES 'ROUND 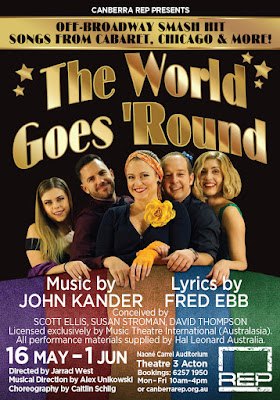 Broadway composer John Kander and his lyricist partner, Fred Ebb, are best known for their musicals ‘Cabaret’ and ‘Chicago’.  The musical revue, ‘The World Goes ‘Round’, first performed in 1991, showcases songs mostly from their musicals written from the early 1960s up to the early 90s.

Performed by the employees in an American-style bar well-designed by Chris Baldock, the production has a slightly surreal quality.  Are these people real or are they ghosts?  It’s a clever idea that appeals to your imagination while allowing the songs to speak for themselves with no narrative or linking dialogue.

The intended cast of five has increased to six, due to the sudden indisposition of Samantha Marceddo.  Director, Jarrad West, and choreographer, Caitlin Schilg, have taken on her songs and dances while she recuperates.  Both West and Schilg perform very well as if the roles were theirs all along.

There were some standout moments in the show.  I much preferred Jarrad West’s reflective interpretation of ‘Coloured Lights’ from ‘The Rink’ rather than Liza Minnelli’s too strident original version.  The songs, ‘I Don’t Remember You’ from ‘The Happy Time’ and ‘Sometimes A Day Goes By’, became a haunting duet well sung by Isaac Gordon and Joel Hutchings.  Isaac Gordon also proved to be a fiercely good skater in ‘The Rink’ and Joel Hutchings sang an electrifying ‘Kiss of the Spider Woman’.

Julia Walker sang a delicately nuanced ‘A Quiet Thing’ from ‘Flora The Red Menace’ and Louiza Blomfield was especially funny in her duet with Jarrad West, ‘The Grass Is Always Greener’, from ‘Woman Of The Year’.  Caitlin Schilg performed and sang a smouldering ‘All That Jazz’ and her choreography overall for the show was just right.

Musical director, Alex Unikowski, has obtained fine results with the singers and the band.  Costumes by Fiona Leach were nicely judged and imaginative.  Lighting by Helen Nosworthy had a couple of opening night glitches but was otherwise well done.

The sound design and operation by Joel Edmondson was problematic.  Performers and band were too strongly amplified for this small venue.  The lyrics need to be clearly heard but these were often distorted by the level of amplification and it was painful listening to it at times.

Apart from the sound issue, Jarrad West has directed an entertaining and very enjoyable show.

Len Power’s reviews are also broadcast on the Artsound FM 92.7 ‘In the Foyer’ program on Mondays and Wednesdays at 3.30pm.
Posted by Canberra Critics Circle at 6:13 PM