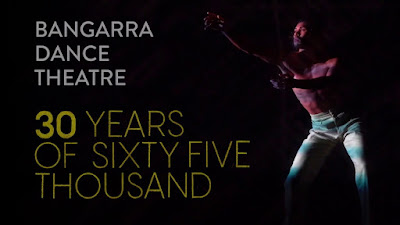 In this anniversary season of dance, the Bangarra Dance Company looks back over their 30 years of existence.

The first work, ‘Unaipon’, focusses on David Unaipon, inventor, philosopher, writer and storyteller, who is credited with being the first published Aboriginal author.  His image is reproduced on the Australian $50 note.  In the opening section, ‘Ngarrindjeri’, David Unaipon philosophises about our existence in the universe.  The second part focusses on Unaipon’s fascination with the science of motion, winds and power.  In the third part, he sees religion and God as a unifier of all races.

Choreographed by Frances Rings, the work has an epic, haunting quality throughout.  The sixteen dancers create a magical world with depth and emotion with their fine dancing.  The ‘String Games’ section was particularly inventive and well-performed.

‘Stamping Ground’, a work choreographed in 1983 by Jiří Kylián for the Nederlands Dans Theater, was based on Kylián’s deep interest in and personal experience of Aboriginal dance and the culture of Aboriginal and Torres Strait Islander people.

Simply staged, the work celebrates indigenous culture through a European sensibility and has occasional flashes of unexpected and welcome humour.  The six dancers performed the intricate and physically demanding choreography very well, making this a highly enjoyable experience.

The final work, ‘To Make Fire’ consists of three worlds.  An excerpt from 2008’s work, ‘Mathinna’, describes the experience of a young Lowreenne Tasmanian girl removed from her home and adopted into western colonial society.  ‘About’ from 2002’s ‘Belong’, describes the cultural connection between the people of the Torres Strait islands and the spirits of the four winds.  The third part, ‘Clan’ – taken from ‘ID’ from 2011 and ‘Rush’ from 2002 – investigates what it means to be an Aboriginal and/or Torres Strait Islander person in the 21st century.

Choreography was by Stephen Page and Elma Kris.  Woven together seamlessly, this work has a flow and energy that is exciting and thought provoking.  It was danced with accuracy, feeling and moments of great sensitivity by the sixteen dancers.

This celebration of 30 years of fine work by Bangarra was entertaining and highly memorable.

Len Power’s reviews are also broadcast on the Artsound FM 92.7 ‘In the Foyer’ program on Mondays and Wednesdays at 3.30pm.
Posted by Canberra Critics Circle at 12:34 PM