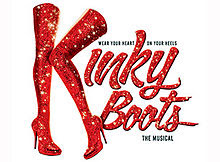 Free Rain Theatre under the leadership of Anne Somes once again asserts its esteemed place as a producer of high class, professionally staged musicals, maintaining its outstanding achievements with such popular musicals as Mary Poppins, Shrek, 42nd Street and Wicked. Its latest offering, Kinky Boots, based on the film by Geoffrey Deane and Tim Firth, is not your usual run of the mill glitzy song and dance musical. In taking on Kinky Boots, Free Rain could have run the risk of being too big for its own boots. With a book by Americans Harvey Fierstein and music and lyrics by New Wave artist Cindi Lauper, Kinky Boots appears on the surface to be more akin to the post Thatcher social issue musical. Willy Russel’s Blood Brothers, Brassed Off , Simon Beaufoy and Ann Devlin’s The Full Monty and Lee Hall and Elton John’s Billy Elliott  reinvent our understanding of musical theatre.  No longer are we seduced by the catchy tunes of Anthony Newly or Julian Slade or Lionel Bart. Instead we are confronted by the gritty and troubled lives of working class Brits, mainly living in Thatcher’s dismantled and discontented north of England. Like Kinky Boots, these are musicals, sometimes, adaptations of straight plays that are designed to confront, challenge and disturb. At their heart they are about people and their struggles, where musicians’ songs serve the passions and the traumas of people simply trying to survive.

If such a work is to be successful, it needs to touch the heart, prick the conscience, and in true Brechtian tradition convey its message through entertainment. Free Rain Theatre Company does this admirably, not through sweet and seductive melodies that one hums for days after, nor through schmalzy romance in the boy meets girl, boy loses girl, boy meets girl again scenario, nor through pretty lighting, although nothing stopped lighting designer Philip Goodwin from turning on some spectacular and mood enhancing effects. What it does need and which Free Rain has delivered in spades is excellent, inventive  direction by Derek Walker, stunning, well drilled and highly skilled choreography, especially of the drag queen sequences by Michelle Heine and feisty, versatile orchestration under the baton of Nicholas Griffin.

When it comes to casting, Kinky Boots is no easy fit. Walker’s casting is with a clear eye to character. These are workers in a northern England, flagging shoe company, inherited by Charlie Price (Martin Everett ), who takes on the huge responsibility of revitalizing his late father’s long-time shoe factory. The cast has a ring of authenticity. All shapes and sizes inhabit the factory floor.  This is no chorus line glamour, rather it is a chorus ensemble clamour that bursts into life with exuberant fervour, terrific singing and and contagious zest. Charlie’s lightbulb moment to make female boots for male drag show performers is a gift for the show’s  creators Harvey Fierstein and Cindi Lauper to inject a touch of high camp chintz and cheek into the show and Walker’s cast lift the roof with their sheer pizazz, headlined by Lola (Rania Potaka-Osborne).

There are fine stand-out performances from the pro-am cast, tightly directed and choreographed, but with scope for some hilarious comical invention from Brittanie Shipway as doting sidekick, Lauren and macho boorishness from Tim Stiles as homophobe, Don who eventually learns to accept people for whom they are. There is delightful comic business from Kara Sellars as Pat, while Michael Hemming gives a solid performance as the factory’s loyal foreman, George. It is the drama of the workplace and the challenges in people‘s lives that gives the musical heart and Cindi Lauper’s eclectic musical genres that gives it its fire. It is too often the case, and is too often in this instance, that lyrics are sacrificed for energy, and a work that is about character needs the lyrics to be heard.  Maybe the eager screamers behind me didn’t mind.

Designer Cate Clelland captures the essence of the old factory with its different levels and converted sections that become the workbenches, covered in leather and sewing machines. There is an immediate flavour of working class, industrial Britain that also lends the production a solid authenticity.  I would have preferred less overwhelming red brickwork on the intimate Q Theatre stage .Special mention deserves to be credited to Rachel Laloz and her props team and once again to Fiona Leach and her consistent attention to detail in the costuming.
Free Rain’s Kinky Boots has kicked off boots and all with high-kicking flair and a message of tolerance and acceptance that gives this musical and its fine local production a touch of class and true sentiment. Another feather in the cap for the cast and creatives of Free Rain Theatre Company!

Posted by Canberra Critics Circle at 9:18 AM