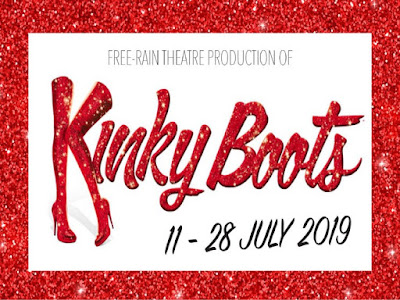 
The combination of composer and lyricist, Cyndi Lauper, and book writer, Harvey Fierstein, proved to be a magical one for the Broadway musical, ‘Kinky Boots’.  Opening in 2013 in New York, the show won six Tony Awards including Best Musical and ran for over 2,500 performances.  It only closed on Broadway a few months ago.

Based on the 2005 British film of the same name, it tells the story of Charlie Price who inherits a shoe factory from his father and saves it from the brink of bankruptcy by designing a successful range of high-heeled boots in partnership with cabaret performer and drag queen, Lola.  Their unlikely friendship gives the show a warmth and heart that is quite beguiling.

Director, Derek Walker, has given us a high energy, good-looking production that plays fast and furious from start to finish.  Three professionals play the major leads, heading up a talented and enthusiastic large cast of local performers.

As Charlie Price, the inheritor of the factory, Martin Everett plays his role with considerable depth and sings very well.  His solo song, ‘Step One’, was especially well sung and he was very moving in the duet, ‘Not My Father’s Son’.

As drag queen, Lola, Rania Potaka-Osborne gives a sassy but very human and appealing performance in this pivotal role.  Unfortunately, there were some vocal problems in the singing of his big song, ‘Hold Me In Your Heart’ and in the duet with Charlie earlier in the show.

As the emerging love interest for Charlie, Brittanie Shipway was a delight in a very physical, comedic performance as factory worker, Lauren.  A good singer, too, she commanded the stage with her song, ‘The History Of Wrong Guys’.

Amongst the large cast there were standout performances by Peter Dark, Tim Stiles, Hannah Lance, Chelsea Heaney, Kara Sellars and Michael Heming.  The singing and dancing by the guys playing the Angels – the drag queens supporting Lola – were outstanding.

The large ensemble performed impressively, singing and dancing with energy and precision.

Sound balance between orchestra and singers was fine and Nicholas Griffin’s band performed the colourful music with gusto and accuracy.  The large number of eye-catching costumes by Fiona Leach was a triumph of design and Cate Clelland’s substantial set was atmospheric and well-designed.

Michelle Heine’s fine choreography was danced with assurance by the company and Phillip Goodwin’s clever lighting design was especially impressive with the scenes showing the inner thoughts of the characters.

‘Kinky Boots’ is a feel-good musical and great entertainment.  This production really delivers the goods.