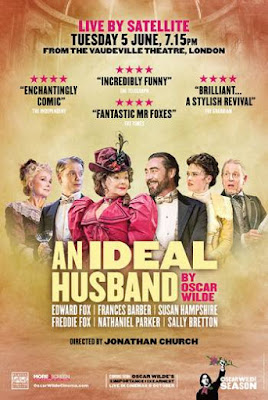 First produced on the London stage in 1895, Oscar Wilde’s play, ‘An Ideal Husband’
cleverly weaves a story of blackmail and political corruption with anti-upper class sentiments and the question of public and private honour.

Sir Robert Chiltern, a prominent politician is preparing to expose a financial scandal but a woman, Mrs Cheveley, who has invested heavily in the shady venture threatens to uncover a damaging secret in the politician's past if he exposes the speculation as a fraud.  Sir Robert turns for help to his friend Lord Goring, an apparently idle philanderer and the despair of his father.

Nicely directed by Jonathan Church in 2018 for the Classic Spring Theatre Company live onstage at the Vaudeville Theatre in London, this is a fine production of Wilde’s classic play.

As the scheming Mrs Cheveley, Frances Barber expertly gives her character a sophisticated surface charm while showing the darker, calculating woman underneath.  While her behaviour is reprehensible it’s clear that society’s attitudes are much to blame for her actions.

Nathaniel Parker as the troubled Sir Robert Chiltern also gives a fine performance as the upstanding politician in a moral dilemma.  Freddie Fox is a delight as Viscount Goring, a young man about town who ultimately displays an unexpected strength of character.

It was good to see Edward Fox on stage in the role of the Earl of Caversham, Viscount Goring’s father.  In real life he actually is Freddie Fox’s father.  His skill at playing characters in this period is wonderful to watch.  His sense of timing is superb.

There was excellent work by everyone in the large cast including Sally Bretton as a charming but morally inflexible Lady Chiltern, Faith Omole as Mabel Chiltern and Susan Hampshire as Lady Markby.

It was a nice touch to have Samuel Martin playing atmospheric violin interludes before the curtain during the scene changes and the period settings by Simon Higlett are sumptuous.

Together with ‘The Importance of Being Earnest’, ‘An Ideal Husband’ is often considered Wilde's dramatic masterpiece.  After Earnest, it is his most popularly produced play.

‘Theatre of Power’, a regular podcast on Canberra’s performing arts scene with Len Power, can be heard on Spotify, ITunes and other selected platforms or at https://player.whooshkaa.com/shows/theatre-of-power.
Posted by Canberra Critics Circle at 3:34 PM