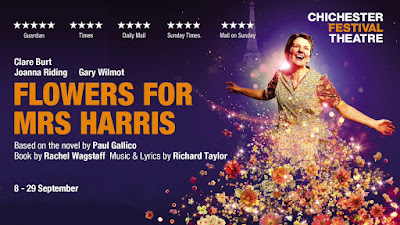 Based on the novel by Paul Gallico
Book by Rachel Wagstaff
Music & Lyrics by Richard Taylor
Directed by Daniel Evans
Streaming from the Chichester Festival Theatre to 8 May
https://www.cft.org.uk/flowers-for-mrs-harris-broadcast

While the pandemic rages on, the Chichester Festival Theatre in England has given us the opportunity to watch their 2018 production of the musical, ‘Flowers For Mrs Harris’, through online streaming.

It was first produced in Sheffield in 2016 where it won three UK Theatre Awards including Best Musical.

Based on the novel by Paul Gallico, the story focusses on middle-aged battler Ada Harris who spends her days cleaning houses for rich folks while inspiring others to reach out for their dreams.  A picture of a Christian Dior dress suddenly inspires her to follow a dream of her own that takes her to Paris and back.  It’s a charming and touching story about a woman who doesn’t realize how much she inspires others while having no real expectations for herself.

The lavish and colourful production has been designed by Lez Brotherston.  The challenge of mounting a complex musical on a stage with the audience on three sides of the proscenium-less stage has been met superbly.

Performances by the ten cast members are excellent.  Leading the company is Clare Burt as Mrs Harris.  She gives a skilful performance of great warmth and sings the challenging music very well, too.

The other nine principal performers play the rest of the characters in dual roles.  So expertly is this done, that it takes a while to realize it’s the same performer.  A fashion show in Paris in the second act is a visual highlight with models appearing in fabulous post-war gowns by designer, Christian Dior.

The director, Daniel Evans, has produced a memorable show in which all the elements come together very well.  His clever staging and the depth of characterisations he has obtained from his cast are impressive.

The music and lyrics by Richard Taylor work very well in the context of the show but it’s a recitative-style score with no individual songs.  It’s fine while you’re watching it and you can admire the cleverness of the score and the complex arrangements but there are no tunes to remember afterwards.  It’s a challenging sing for the cast and they handle it very well.  It will help if you turn on the Closed Captions when you start watching it.

Overall, the story, the acting and the staging are what make this so memorable and it was good to have the opportunity to see it.  The show streams from the Chichester Festival Theatre website.