FIDDLER: A MIRACLE OF MIRACLES 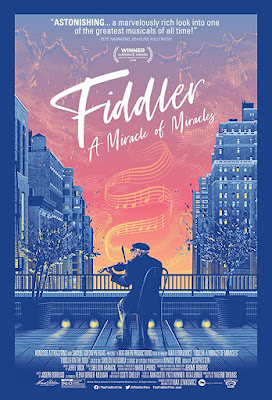 ‘Fiddler: A Miracle of Miracles’ is a 2019 documentary film about the creation and significance of the 1964 musical ‘Fiddler on the Roof’.  It features interviews with Fiddler creators such as Jerry Bock, Sheldon Harnick, Joseph Stein, and Harold Prince, as well as scholars, actors, and other musical theatre figures like Stephen Sondheim and Lin-Manuel Miranda.

Based on the Tevye stories by Sholom Aleichem, the musical was developed during the early 1960s.  With music by Jerry Bock, lyrics by Sheldon Harnick, and book by Joseph Stein, the show is set in the impoverished village of Anatevka in Russia in 1905.  The story centres on Tevye, the father of five daughters, and his attempts to maintain his Jewish religious and cultural traditions as outside influences encroach upon the family's lives.  It opened on Broadway in 1964 and ran for 3,242 performances.  It was made into a successful film in 1971 and stage productions continue to be produced around the world.

The documentary presents a wealth of information about the musical and its literary source.  Interviews with prominent Jewish academics provide a deeper understanding of the cultural and political background to these stories.  The story of the development of the musical is no less fascinating with first hand details provided by the surviving creative team members and other luminaries.  The film is dedicated to the memory of the producer, Harold Prince, who died during production.

Photographs from rehearsals of the original production as well as video clips from more recent performances and from the 1971 movie have been well-chosen to illustrate the narrative.

Highlights include a montage of singers and groups from the 1960s performing ‘If I Were A Rich Man’, some of them fine but others are so awful they’re funny.  ‘Hamilton’ composer and star, Lin Manuel Miranda, demonstrates that he can still remember the choreography from a 6th grade school production.  Later, at his wedding, an amateur video records an impromptu performance of him singing ‘To Life’ with his father-in-law.

Best of all is Israeli actor, Topol, who played Tevye so memorably in the film version and on stage remembering his reaction to the filming of ‘Far From the Home I love’ in a desolate location.  That 50 year old memory still brings tears to his eyes.  It makes you want to watch the movie again.

This is an excellent documentary about one of the most loved musicals of all time.  You can see it on Amazon Prime and Youtube.