BEST WORST THING THAT EVER COULD HAVE HAPPENED 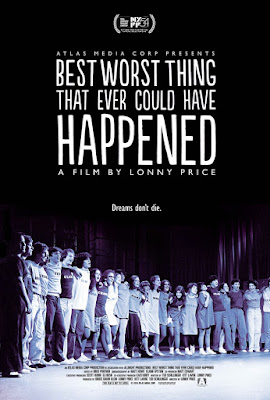 The documentary ‘Best Worst Thing That Ever Could Have Happened’ takes its title from the lyric of a song in Stephen Sondheim’s musical, ‘Merrily We Roll Along’.  This unusual and compelling documentary details the journey of a much anticipated musical from auditions to opening and beyond.

After Sondheim’s Broadway smash hit of 1979, ‘Sweeney Todd’, his next show was to be a 1981 musical version of the 1934 play ‘Merrily We Roll Along’ by George S. Kaufman and Moss Hart.

Such was the anticipation for this show that CBS Television started filming auditions and early rehearsals for a planned documentary.  However, when the show was a surprising flop and closed after only 16 performances, the project was shelved.

Many years later, the filmed footage was re-discovered and given to original cast member, Lonnie Price, who was now a highly respected director and writer.  He created this documentary called ‘Best Worst Thing That Ever Could Have Happened’ from the footage.  It charts the hopes and dreams of the group of young actors excited by their good fortune to be cast in the latest Sondheim musical.  Years later, cast members reminisce about the experience of being part of the show and the shock of its early closure.  Some recovered and moved on to have successful careers in showbiz but many of them were deeply scarred by the experience.

Watching the discussions and decisions being made by the creators are fascinating.  Knowing that the show was ultimately a flop makes it especially poignant as we see the enthusiasm and joy of the very young cast when told they have been cast in the show.

Original leading man, James Weissenbach, who had been replaced prior to opening night by Jim Walton, talks about the crushing blow he experienced personally.  He seems remarkably philosophical about it now.  Jim Walton, who replaced him, is also on hand to talk about being a cast member suddenly promoted to leading man.

Director of the documentary, Lonnie Price, is seen watching footage of himself during rehearsals.  It clearly has an immense impact on him.  He tells us that he has directed every Sondheim musical for the theatre over the years since but has never directed a production of ‘Merrily We Roll Along’.

It’s an electrifying, bitter-sweet documentary and anyone who’s ever been actively involved in a theatre production will find this a particularly moving experience.

‘Merrily We Roll Along’ may have been a flop on Broadway at the time but has continued to have a life ever since.  It was one of the shows scheduled to be performed at the Hayes Theatre in Sydney in April.  Due to Covid-19, it has been postponed to 2021.

‘Best Worst Thing That Ever Could Have Happened’ is currently streaming on Netflix and for theatre lovers, it shouldn’t be missed.

‘Theatre of Power’, a regular podcast on Canberra’s performing arts scene with Len Power, can be heard on Spotify, ITunes and other selected platforms or at https://player.whooshkaa.com/shows/theatre-of-power.
Posted by Canberra Critics Circle at 11:29 AM