AN DIE MUSIK (TO MUSIC) 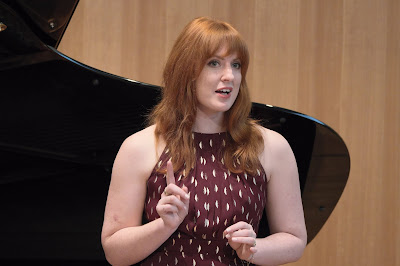 Music can take us out of ourselves and bear us away from life’s challenges.  Taking their inspiration from the words in Franz Schubert’s song “An Die Musik” (To Music), Bethany Hill, soprano, and Penelope Cashman, piano, gave us an Art Song Canberra concert that did exactly that.

Bethany Hill is an Adelaide soprano who is equally at home on the operatic stage and in intimate chamber music settings.  She is a passionate performer of early music and has appeared as a recitalist around Australia.  She has performed roles in Purcell’s “Dido & Aeneas”, roles in several Mozart operas, Schoenberg’s “Erwartung” and Handel’s “Saul”.

Penelope Cashman is an Adelaide-based pianist, vocal coach, performer, teacher and researcher.  As pianist and repetiteur, she has worked for the State Opera Of South Australia, Opera Queensland and other companies here and overseas.

The program commenced with a group of songs that focussed on the relationship between music and poets.  The first song, “If music be the food of love”, composed by Henry Purcell and arranged by Benjamin Britten, had words by Henry Heveningham.  Bethany Hill sang it beautifully, her clear voice soaring with expression.

It was followed by Schubert’s “An Die Musik”, with words by Franz von Schober.  This was the signature work of this concert and was sung with great feeling, enveloping the audience in the power and joy of music.  “The son of the muses”, composed by Schubert to the words of Goethe, displayed Hill’s accurate singing and clear diction in this fast-paced song.

Songs relating to nature and, particularly the beauty of flowers, followed in this well-planned concert.  A group of three songs composed by Roger Quilter were haunting, reflective and wistful.  Hill sang them all with a warmth and tenderness that was very appealing and Penelope Cashman’s accompaniment was excellent, especially in “The Wildflower’s Song”.

Her heart-felt singing of the next item, “The Last Rose of Summer”, a traditional song arranged by Benjamin Britten was one of the highlights of the concert.  The clarity of Hill’s voice was then fully displayed with her gentle a capella singing of “I’ll meet you there” by Australian composer, Jodie O’Regan.

The final works of the concert by composers Erich Korngold and Leonard Bernstein showed the wide range of Bethany Hill’s vocal skills.  Penelope Cashman’s playing of the final part of Korngold’s “Marietta’s Song” was particularly notable.

This was the first time these performers have appeared for Art Song Canberra.  Let’s hope they return for another concert as fine as this one.

This review was first published in the Canberra City News digital edition of the 13th of December.

Posted by Canberra Critics Circle at 7:01 AM