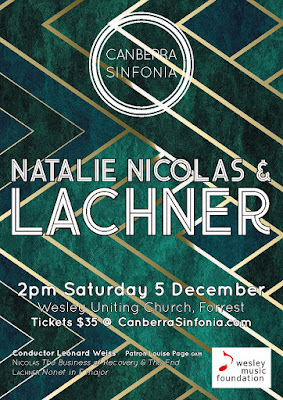 Recently returned from musical studies in the USA, Leonard Weiss conducted the Canberra Sinfonia in their only concert for this year.  It was good to have them all back.

The program, performed at the Wesley Uniting Church in Forrest and entitled ‘Natalie Nicolas & Lachner’, concentrated on the works of two composers – Natalie Nicolas and Franz Paul Lachner - who are almost three centuries apart, giving the audience a nice contrast in style and content.

Natalie Nicolas is an Australian composer who completed her Master of Music (Composition) under scholarship at the Sydney Conservatorium of Music where she is now a tutor and lecturer.

The first of two of her works presented in this concert was “The End”, which was written for and won the Flinders Quartet Composition Competition in 2019.  It had a quietly reflective opening, followed by a busy mid-section with moments of tension and underlying playful melodies leading to a wistful and calm finale.  It was played with clarity and colour.

The second work, composed in 2020, “The ‘Business’ Of Recovery” deals very much with the circumstances we’ve all found ourselves in this year.  Pulsating rhythms at the beginning were edgy and tentative in mood and, as the work progressed, it had a sense of hope that ended with a bright, sustained note of optimism.  It was a work that really resonated with today and was very well-played

Both pieces were arranged by Natalie Nicolas for this performance.

Nine members of the Canberra Sinfonia then played “Nonet In F Major” by Franz Paul Lachner who was a prominent German composer and conductor in the 19th Century.  No longer well-known, his compositional output includes eight symphonies and several orchestral suites, six operas, a Requiem and a number of chamber works.

His “Nonet In F Major” is a highly romantic and melodic work.  An outstanding Minuet second movement includes a notable clarinet solo, played very well here by Tim Artelaris.  It was followed by a quietly elegant Adagio and ended with a robust and bright Finale.  The orchestra members gave a very fine performance of this charming work.  It made you want to explore more of the output of this composer.

At the end of the concert, the audience showed its appreciation with sustained applause necessitating more than one bow.  It was richly deserved by all concerned.

This review was first published in the Canberra City News digital edition of the 6th of December.

Posted by Canberra Critics Circle at 8:39 AM