The Picture of Dorian Gray by Oscar Wilde

To say that I was blown away by Kip Williams’s production of The Picture of Dorian Gray for the Sydney Theatre Company would be an understatement. I am not given to unconstrained hyperbole but hyperboles afford the greatest accolades for Eryn Jean Norvill’s portrayals of Oscar Wilde’s enigmatic characters. For two hours traffic on the stage, Norvill intrigues, captivates, dazzles and delights her audience as she moves seamlessly from narrator to character in the telling of Oscar Wilde’s entire short story of the Adonis like youth whose corrupted Faustian  desire for youthful immortality is revealed in the portrait while Dorian Gray retains the beauty of his younger years. It is a moralistic tale more clearly expressed in a contemporary mantra of “Be careful of what you wish for!”

In Eryn Jean Norvill we behold an ascending star of the Australian stage. Under Kip Williams’s inspired flight of the imagination she commands a mesmerising hold over her audience, aided by Williams’s use of video cameras to create live streamed and pre-recorded footage of Norvill as storyteller, Dorian Gray, the hapless artist Basil Hallward , the corrupting Sir Henry Wotton and a host of other characters that populate Wilde’s Victorian fantasy. At times, in a feat of technical wizardry, live streamed characters interact with pre-recorded and edited video footage upon one of the many video screens upon the Roslyn Packer Theatre stage. The skilful video operators in black also double as brilliantly disciplined props handlers and dressers, supporting Norvill’s lightning speed changes, while never allowing the action to lag. The entire production is a joyfyl expression of perfect timing and stage movement. Williams has used video technique before, most notably in his engrossing production of Brecht’s The Resitsable Rise of Arturo Ui, but nowhere with such ingenuity and faithful adherence to Oscar Wilde’s period and extravagance. 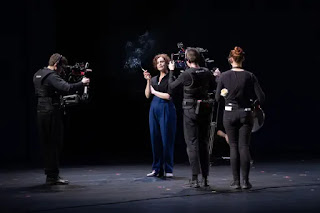 Wilde’s philosophical moralistic novel, The Picture of Dorian Gray, drawing as it does upon Victorian Gothic influence contains a bitter irony of an older man’s corruption of a beautiful youth, a reversal of Wilde’s own experience and downfall due to a love for his Adonis, the beautiful Bosie, son of the Marquis of Queensbury. In Dorian Gray’s cruel and unwitting treatment of the innocent Sybil Vain, we see the cruelty suffered by Wilde as a result of his blinded love for Bosie. The challenge facing Kip Williams has been to stage the adaptation as a one woman performance, while bringing to life the various characters of the novel. Williams’s vision and Norvill’s astounding performances combine in a theatrical tour de force that not only breathes new life into Wilde’s portrait of art for art’s sake and the corrupting power of the human heart and mind, but projects an exciting new destiny for the theatre. Our willing suspension of disbelief is nowhere better engendered than in the Sydney Theatre Company’s ground-breaking production of The Picture of Dorian Gray. Williams’s direction and Norvill’s performance make this the hottest ticket in town. The ephemeral nature of theatre is its own  tragedy. To miss it would be yours.
Photos by Dan Boud
Posted by Canberra Critics Circle at 11:27 AM