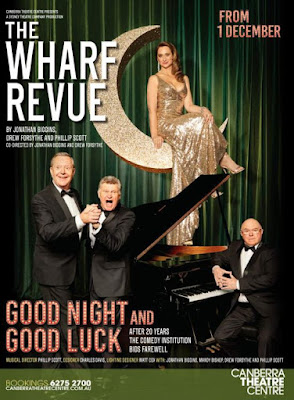 The End Of The Wharf As We Know It was how it all began in the year 2000.  The truth has finally caught up with the satire as the Sydney Theatre Company has now refurbished their original theatre Wharf 4/5, Walsh Bay, to open in 2021.  Now it really is Good Night and Good Luck.  Yet with sound Shakespearian internal character conflict in mind, like Hamlet, they say “all the refurbishment works have been designed with a heritage framework”.  We will still walk the long walk out over Sydney Harbour waters, but perhaps the old wooden cobblestone effect may now become a smoother journey.

So can The Wharf Revue be refurbished but retain its heritage value?  And can we hope to wake up next year after this year’s terrifically good night to an extension of our amazingly good luck to have had such sizzling political satire run for 20 years?  I certainly hope so.

Two particularly successful features of this year’s show are precursors of continuing theatrical refurbishment for The Wharf.

The quality of incisive sharpness in the writing is not constrained (that’s the heritage) but the warmth of feeling, of horror, of empathy for New York under Covid attack with no presidential protection was a new sensation, crossing the line and back again from satire to tragedy.

Then, throughout the whole show, the technical quality, originality of content, as well as satirical precision in the actors’ performances in the video designs and presentations, though a continuation of this developing heritage from previous years, was a leap forward this year for womankind especially.  Amanda Bishop “first impersonated Julia Gillard as part of Waiting for Garnaut, the 2008 Wharf Revue” (Wikipedia), which I remember well, but her range on stage and screen in Good Night and Good Luck 12 years later is quite remarkable, in conjunction with Lena Cruz.

For this the video and selection of material work of Susie Henderson must receive the highest commendation.

The titles of the 17 items also show their heritage and update values.  “When We Get Back To Normal” shows these very authors right now in lockdown, absolutely bored, waiting for people to appear in the auditorium.  Ooops! They’re here!

Remember The Seekers?  Amanda Bishop goes down a treat as Judith Durham: will they ever find another job?  “Norman Swan” is our hero: the medicine we all so sorely need.  “How did you get here?” says one Virus to another; “On a cruise ship.”  How else?

Democracy is the “People’s Choice”.  Solos by Putin, Bolsonaro and the very weird Elton Jong with his highly informative history of the Jong Il family make unAustralian dictatorships very funny.  Australia gets what it deserves in “Koala”; “K Rudd” (a wonderful reprise by Drew Forsythe in Kevin’s reincarnation as Murdoch critic); the Liberal “Fawlty Towers”, leavened by “The Pauline Doctrine” and contrasted with the Labor “Cats in the Ranks”. Aotearoa’s “Jacinda Ardern” is heavenly perfection in comparison, while “The Sounds of Sirens” in New York are all that we hear in the silence.  A little light relief is provided by the New South Wales premier “Gladys”, taking us off to the wild west of the Donald – “The Man who shot Liberty”.

What a way to end!