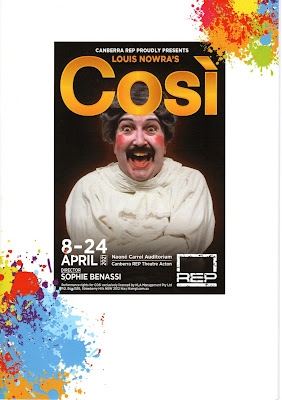 Cast: in order of appearance

The sincerity of Louis Nowra’s art flows off the stage in Rep’s thoroughly engaging presentation of Cosi.  The energy, commitment and sense of both enjoyment and satisfaction is surely the product of quality directing by Sophie Benassi.  I look forward in anticipation to a career firmly based in her BA and DipEd, and NIDA training, following her appointment as Co-Artistic Director of Canberra’s Mockingbird Acting Studio and Theatre Company alongside founder Chris Baldock.

I came away with a sense of a new generation in Canberra theatre and, as the Covid experience grinds on, my faith in humanity was reaffirmed.

Cosi is fascinating because we find ourselves laughing, often very much out loud, at what characters are doing, at the same time as understanding empathetically their clinical situation.  This production works so well because not only is the acting consistent with Nowra’s intention, but so also is the casting – of actors whose physical features are exactly as I have always imagined for these characters – and the wonderful costumes, make-up and hairdos.  The characters we see look like the real thing, as themselves and in their roles in the final performance of their play, at the same time as symbolically representing the types of people they would have been in the period of the Vietnam War Moratorium Marches, the first of which in Australia was on May 8, 1970.

Just look at Lewis’s wide-bottomed trousers, and anyone my age remembers – not just the fashion, but the ‘Arts’ university personality which I’m sure Louis must have been.  We can’t help but feel for his discombobulation when faced by the strength of character of people who have been classed and ‘sectioned’ as clinically insane.

Though some characters are naturally likely to attract our attention more than others, such as the fire-bug Doug, the dominant Roy, the mysteriously silent Henry and the Wagner accordion player Zac, the value of this production is in the care taken to give equal standing to each part.  Julie’s somewhat distanced watching of the action early on and progress towards being discharged, Ruth’s obsessive compulsive disorder, and Cherry’s sexual fixation become the central throughline connecting Mozart’s Cosi fan tutte story – of how women are thought of by men and what women actually think of the inadequacies of men – to the modern situation women are in.

Interestingly, the only characters with whom we feel little sympathetic connection are the three sane figures: Lewis’ moratorium organiser friend Nick; his girl friend Lucy – who ‘sleeps’ with him but ‘has sex with’ Nick; and Justin, the social worker who represents the authority over the patients.  Though Alex, Emily and John played their roles perfectly well, they were hardly funny and are left somewhat in the shade – except for Alex as Nick when Max’s Henry very nearly throttles him.  That scene was horribly funny.

The set design was equally impressive, having been previously half-burnt down by Doug and so having unexpected holes for entrances and exits apart from the doorway in on our left and the clearly labelled “dunny” on the right.  I’m still laughing at Henry’s several times’ complete circumnavigation of his theatre, which included our auditorium, when he has to work off his energy because of his medication upset.

All round then, literally as well as metaphorically, Rep’s Cosi does justice to Louis Nowra’s ‘Lewis’, ending with Martin Fatmaja Hoggart’s quietly done and emotionally gripping return to reality as he describes what happened in later life to his two girlfriends.  That’s when the laughter stopped.

The synopsis in the program says “Cosi blurs the lines between sanity and insanity, fidelity and infidelity, and reality and illusion”, but I think Cosi makes the distinctions clearer.