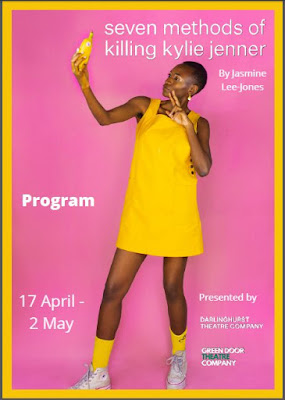 Surely it’s some racist git (that’s London Cockney for ‘idiot’).  Who is the Kylie Jenner that somebody wants to kill?  Is this meant to be funny?

Well, it’s often very funny, especially for the social media generation who get all the jokes in online language.  KMT (kiss my teeth!). JS (just saying!)

Why Cockney?   That’s because this exciting, irreverent and ultimately emotionally gripping play comes from the best of London theatre:

Jasmine was originally developed as a writer through the Royal Court’s Young Court programme and seven methods of killing kylie jenner was first commissioned as part of The Andrea Project – A day of free events inspired by the life, work and legacy of Andrea Dunbar. This work was part of the Young Court’s mission to expand the Royal Court’s commitment to new voices.
https://royalcourttheatre.com/whats-on/sevenmethods/

Andrea Dunbar (1961-1990),  wrote her first play at the age of 15, The Arbor, about "a Bradford schoolgirl who falls pregnant to her Pakistani boyfriend on a racist estate”. It received its première in 1980 at London's Royal Court Theatre. At age 18, Dunbar was the youngest playwright to have her work performed there.
https://en.wikipedia.org/wiki/Andrea_Dunbar

This production of Seven Methods was destined for Belvoir Theatre in November – December 2020, but “Given the unprecedented global health crisis we currently face, Belvoir has made the difficult but necessary decision to cancel all performances of 7 Methods of Killing Kylie Jenner. We are being cautious and following the government’s directive to restrict public gatherings. The health and safety of our audience, staff and actors is always our first priority.”  So it is a coup for the diverse multicultural community which Darlinghurst Theatre Company represents to begin this year’s recovery with this outstanding example of committed theatre.  Masks are now voluntary, not required in NSW.

A remarkable feature of the show is the finely detailed choreography and timing of the action, combined with AV projections on a very unusual set design, which is very often ironically humorous in its own right, reminiscent of the best standup comedians.  Yet this style morphs into genuine and empathetic characterisation.

The strength of the play and this production in particular is that the audience is taken on a journey to understand from the inside and identify with these people, so affected by the issues of racism and sexual preference, of historical and present-day abuse.

For Canberrans, many of whom may be regulars at Belvoir, now is the time to discover Eternity, the Darlinghurst Theatre Company playhouse in Burton Street, between the well-known Crown and Bourke Streets, just off Oxford Street.

In addition, to see this play will give strength to Canberrans’ submissions to the discussion paper announced today on the new laws proposed by the ACT government to create a charter “that says the territory will support multiculturalism by promoting active citizenship and mutual respect regardless of background”: in Canberra Times News Page 3 [ https://www.canberratimes.com.au ]
.

And if, like me, you unfortunately missed the musical Once, “the only Broadway show to have music that won the Academy Award ® , Grammy Award ® , Olivier Award and Tony Award ®”, in 2019, Darlinghurst Theatre Company will this year take it on tour – to Canberra in August 26th-29th .


And, BTW, Kylie Jenner is real and apparently thoroughly justifies this play:

Kylie Kristen Jenner (born August 10, 1997) is an American media personality, socialite, model, and businesswoman. She has starred in the E! reality television series Keeping Up with the Kardashians since 2007 and is the founder and owner of cosmetic company Kylie Cosmetics.

In 2014 and 2015, Time magazine listed the Jenner sisters on their list of the most influential teens in the world, citing their considerable influence among youth on social media. As of December 2020, with over 206 million followers, she is one of the most followed people on Instagram. In 2017, Jenner was placed on the Forbes Celebrity 100 list, making her the youngest person to be featured on the list. Jenner starred on her own spin-off series, Life of Kylie, which premiered on E! on August 6, 2017. In November 2018, New York Post credited her for being the most influential celebrity in the fashion industry.

According to Forbes, in 2019, Jenner's net worth was estimated at US$1 billion, making her, at age 21, the world's youngest self-made billionaire as of March 2019, though the notion of Jenner being self-made is a subject of controversy, owing to her privileged background. In May 2020, however, Forbes released a statement accusing Jenner of forging tax documents so she would appear as a billionaire. The publication also accused her of fabricating revenue figures for Kylie Cosmetics.


Posted by Canberra Critics Circle at 10:58 AM