John Bell's “One Man in his Time,” Bell Shakespeare Company The Playhouse, April 14-15. 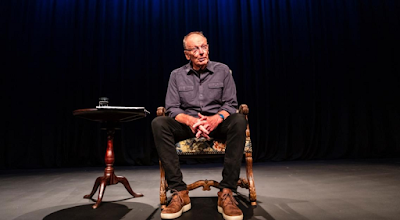 ONE approached John Bell's “One Man in his Time” with some caution: an hour of ‘The Great Man’ regaling us with anecdotes about his life in the theatre – meetings with other greats, comical or tragical incidents related in that mellifluous voice, trippingly off the tongue? Or a pre-mortem solemn requiem based on his interpretation of the works of William Shakespeare?

Let there be no doubt about it: John Bell is a legend in his lifetime – there might be no other thespian living or dead who has made such a personal contribution to the world of theatre, and not only in Australia. He has earned the right to create and deliver his own eulogy. But here we had John Bell talking about William Shakespeare and his characters, his wit and his insights into the human condition, rather than John Bell talking about John Bell.

There might have been the occasional whiff of a lecture to a first-year class of NIDA students, perhaps a suggestion of a master class here or there, but all directed to presenting John Bell's commitment to the relevance of The Bard for us today.

There is, as seemingly always, a debate about this “relevance”, but Bell does not engage in it. As he states in his program notes, he has “chosen to focus on [William Shakespeare's] compassion, empathy, shrewd understanding of politics and power structures” -– ipso facto, what he sees as William Shakespeare's “relevance” to the world of the 21st century.

Most of his one-hour program consists of roles he has himself essayed, from Hamlet to Falstaff and beyond: the tragic, the melodramatic, the comical; his portrayal of the old duffers Silence and Shallow, or of Jack Cade's “kill all lawyers” will live in my memory longer, I think, than his reading of “To be or not to be”.

Which brings me to Bell's distinction between “soliloquy” and “speech” – the former an internal, personal exploration of a dilemma faced by the character (“ To be, or not to be…”), the second, a political and public device used to rouse the rabble, to inspire action – “Friends, Romans, countrymen…” and perhaps there is a third category, to describe an event of worth – Enobarbus describing the arrival of Cleopatra to meet Anthony. And then there is Bell's one concession to the sexism debate – Cleopatra's eulogy over the body of her dead lover, Anthony.

Had he been in the business in Shakespeare's time, when women were not permitted on the stage, Bell might well have played Cleopatra and, by this performance, he would have done it quite well. Here he might also have juxtaposed Cleopatra's grief with Mistress Quickly's almost forensic, yet moving, description of the death of Falstaff.

Another highlight in this program of delights was his treatment of Hamlet's instructions to the Player King. It is Hamlet, a young fan of the theatre, who may be said to be showing off his knowledge of the thespian's art : “Speak the speech, I pray you …” Bell reads the speech as Shakespeare's own instruction to his actors, giving it a more mature inflexion – an earnest attempt by an anxious director/coach determined to get the best out of his actors. If ever I play Hamlet, I'll do this bit, at least, Bell's way.

If there was one low point in this program, it must be where Bell juxtaposes Hamlet's big number – the philosophical soliloquy on life or death with Macbeth's tortured internal debate as to whether, why, or how to murder the King. In the few minutes he has to decide, Macbeth cannot afford the luxury of Hamlet's intellectual musings and resorts to a jumble of disconnected thoughts which does little to support his (Bell's) definition of “soliloquy”.

The applause following Bell's final selection – inevitably, Prospero's finale in “The Tempest” – was well deserved, but I offer special thanks for his inclusion of the excerpt from the apocryphal “Sir Thomas More”, written in the only known example of Shakespeare's own hand and of prescient relevance to the way our Government is dealing (or not) with the “refugee problem”.

It is a text that should be given to every minister responsible for immigration, detention, deportation or any other issues concerning refugees in Australia.