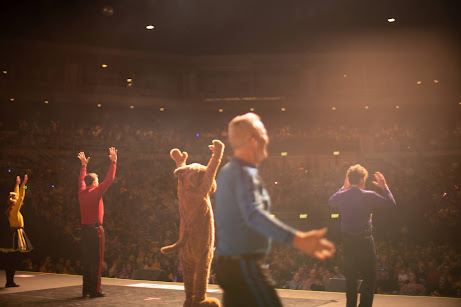 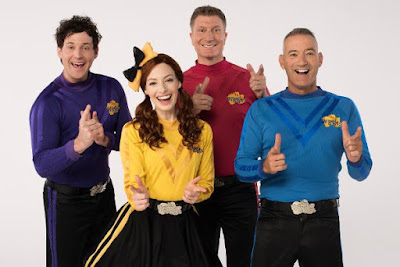 “Why review The Wiggles? I was asked. "They don’t need a review." There is a misguided belief that a reviewer is there only to ensure audiences for a production, by commenting on the show. That is partly true, and it is also true that the target audience for a Wiggles show needs no encouragement. As one person told me their current 30 Year Anniversary Tour, We’re All Fruit Salad is the hottest ticket in town for parents of 3 – 5 year olds. As I walked up the aisle after their bright and colourful show in the Canberra Theatre, I noticed a mother nursing her very young child. You can never start too young introducing your child to the magic of theatre and The Wiggles celebratory show is the perfect introduction.

But a reviewer’s task is also to be a theatre archivist and inform a community of offerings and trends that constitute the diverse world of the theatre. After thirty years, entertaining children and introducing them to a love of the theatre that may last throughout their lives, The Wiggles have become an early childhood phenomenon that has never lost sight of its origins, even though, apart from  founding member Anthony Field , the Green Wiggle, the cast has changed and fascinating, fun characters have joined the original team. At one stage, Simon Pryce, the Red Wiggle invites parent to hold up their children who have come dressed as their favourite Wiggle. When it comes to Emma Watkins, the Yellow Wiggle, the response is huge. The only female Wiggle emerges as a clear favourite, and yet her introduction to the team has been relatively recent.

An idea that was created by musicians Field and fellow Cockroaches musician Jeff Fatt, Murray Cook and Field’s university friend Greg Page and composer Phillip Wilcher three decades ago has become a world-wide phenomenon, and it is easy to see why when one gazes at the faces of the young audience who sit entranced by the colour and movement or join in singing Twinkle Twinkle Little Star or Humpty Dumpty or Hot Potato or do the movement to simple dance choregography. And therein lies the secret to The Wiggles’ success. That and their versatility. Anthony is as adept on bagpipes as he is on guitar and Lachy Gillespie, the Purple Wiggle accompanies expertly on keyboard.  And it is not only the young, fascinated child who happily waves his or her arms through the air. The woman in front of me was as engrossed in the show as her young child. The magic of live theatre casts its spell and every member of the audience young and old gives themselves over to the mesmerising charm of The Wiggles. This is pure and honest entertainment that aims to teach the very young the pleasure of participating in song and dance and movement, guided by consummate performers of their distinctive art. There is no pretension, no hyped up spectacle, no gratuitous participation, but only a genuine desire to fire the imagination and inspire the joy in learning.

To do this, the Wiggles remove the fourth wall through participation and engagement with the audience in the aisles of the theatre. Performers in bear suits bound through the audience, Captain Feathersword romps up and down the aisle. A large inflatable elephant brushes past, followed by a troupe of dancing elephants. On stage larger than life characters delight the children with their antics. There is Henry the Octopus, Dorothy the Dinosaur, Wag the Dog and  Shirley Shawn the Unicorn. The Wiggles lead their audience into a fantastical wonderland of the imagination where reality and make believe combine into a fusion of wonderment.  It all comes together in a We’re All Fruit Salad finale when characters enter in the familiar red Wiggles car in front of the large quilted yellow backdrop with painted faces of The Wiggles and the other characters. For an hour their wizardry holds the young audience willingly captive and I sit in awe of how a show, so simple, so honest, so full of the love of entertaining and teaching young children can weave such a spell. It is a lesson that adult theatre could do well to observe, and that’s why The Wiggles We’re All Fruit Salad Thirtieth Anniversary Tour is worth reviewing!