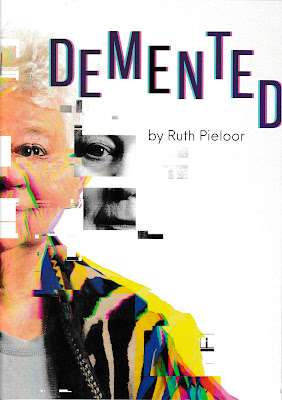 Inspired by her own experience of dealing with her mother’s dementia, playwright Ruth Pieloor has used the magical resources of theatre to create a work of wistful intensity that is both enlightening and entertaining.

Director, Ali Clinch, has produced a fine theatre experience that combines drama, comedy, clowning and puppetry to create the inner world of dementia sufferers as well as the harsh reality for those around them.

On a spare and very wide setting by Mel Davies, the drama of a woman’s journey with dementia plays out in a jigsaw puzzle of brief scenes that move back and forth in time from the early signs of the condition to the inevitable end.  Along the way, the impact on family members is unflinchingly described, as is the inner world and reality of the sufferer herself.

Dementia carers know that the sufferer’s delusional reaction to the world around them can often be quite amusing and remembered with affection long after the sufferer has departed.  This production shows these moments of uneasy comedy very well.


Chrissie Shaw as Maggie, gives a fine performance as the mother with dementia.  This powerful actress moves between moments of comedy, wistful physicality and harsh reality to create a character of colour, dignity and charm.  Because of her skills as an actress, we feel the loss of her character deeply at the end.

Heidi Silberman plays Rachel, Maggie’s daughter and main carer.  She also plays Maggie at earlier stages of her life.  Silberman is especially impressive in the highly emotional scene involving the packing of her mother’s belongings to take her to the care home.


Carolyn Eccles and Rachel Pengilly appear in the puppet and clown hallucination sequences and also as mother and daughter of Rachel.  Eccles is alarmingly superb in her very real portrayal of the tantrum-prone young daughter, Emily.  Pengilly, as Rachel’s daughter, Kat, is especially fine in her performance of the guilt-ridden visit to her grandmother’s hospital bed at the last stage of her life.

The complex lighting design by Jacob Aquilina adds considerable atmosphere, as does the sound design by Damien Ashcroft.  Fiona Leach’s costumes are colourfully apt for the clowning sequences and well-chosen for the reality parts of the play.

For everyone whose lives have been affected by the wide-reaching problems dementia causes, this play and its production will resonate strongly.  For everyone else, who will likely be touched by dementia in some way in the future, it will give an insight and understanding into living with or caring for someone with this cruel condition.

Posted by Canberra Critics Circle at 9:36 AM