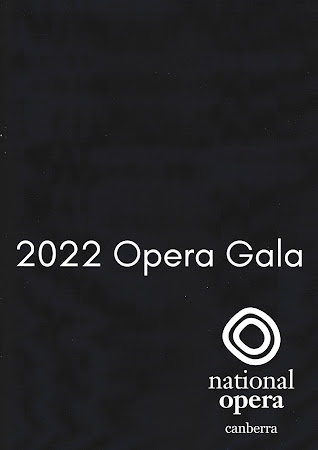 When presenting an Opera Gala, you need to come up with a pretty special program.  Canberra’s National Opera did exactly that, with the National Capital Orchestra, the National Capital Chorus and three very fine sopranos delighting the audience with one great opera tune after another.

It was introduced by the company’s Artistic Director, Peter Coleman-Wright, who promised an evening of well-known opera favourites as well as some opera works that deserved to be better known.  He also set the scene for each of the items as the concert progressed.

The opening item was the Overture from Mozart’s “Die Entführung aus dem Serail” (The Abduction From The Seraglio).  The orchestra gave it a brisk and tight performance under the baton of Louis Sharpe.

It was followed by the first of several choruses sung by the National Capital Chorus directed by Dan Walker.  Their first item was The Bell Chorus from “Pagliacci” by Leoncavallo.  Accompanied by the orchestra, it was a rousing but controlled and pleasing performance of this popular work.


A graduate of the ANU School of Music, Greenwood has gone on to a busy national and international career.  Her dramatic sensibility and fine singing of the Wagner aria and other items in the program demonstrated that she is a singer to watch in the future.

Associate artists, Canberra-based Hannah Carter and Canberra-born Emma Mauch, sang “Er ist der Richtiger nicht für mich!” (He is not the one who’s right for me) from “Arabella” by Richard Strauss.  Both sopranos sang this difficult duet with great skill and feeling, earning strong applause from the audience.

Several other famous opera choruses were performed including The Bridal Chorus from Wagner’s “Lohengrin”, The Humming Chorus from “Madama Butterfly” and the electrifying Anvil Chorus from Verdi’s “Il Trovatore”.  The chorus singers gave them all fine performances.

At the end of the program, the three sopranos gave a highly sensitive performance of The Final Trio from “Der Rosenkavalier” by Richard Strauss and finished the program with a rousing and celebratory Finale from “Die Fledermaus” by Johann Strauss, accompanied by the chorus.  It was then followed by a cheerfully relaxed encore from Gilbert & Sullivan’s “The Gondoliers”.

This was a well-chosen program of opera favourites.   The fine performances of the singers and orchestra clearly delighted the audience.  It was indeed a gala evening.

This review was first published in the Canberra CityNews digital edition of 28 August 2022.

Posted by Canberra Critics Circle at 8:01 AM