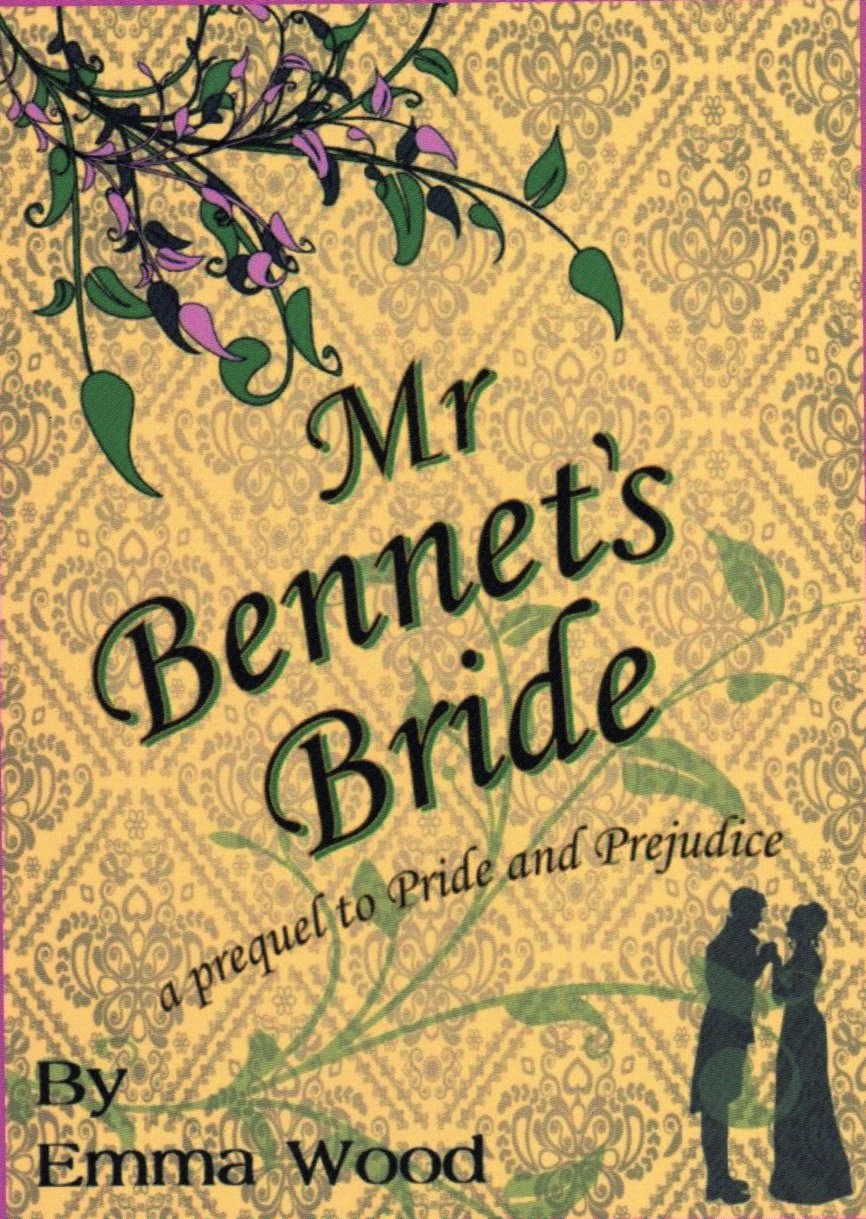 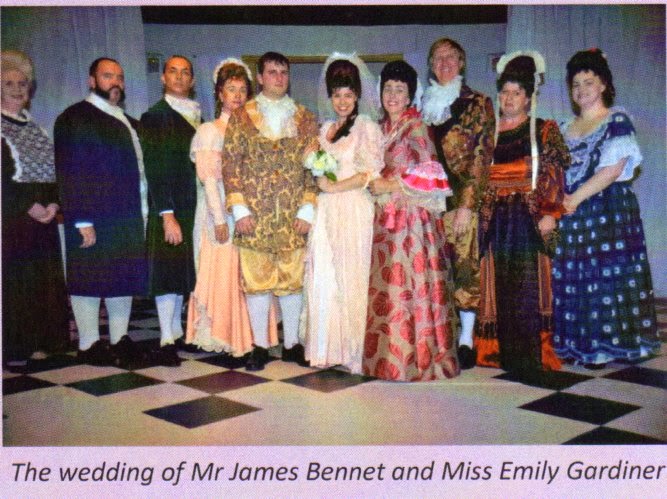 Newcastle Theatre Company is a pro-am community theatre with a similar history to Canberra Rep. [http://www.newcastletheatrecompany.com/aboutus.htm]  The presentation of this play, inspired by the characters of Mr and Mrs Bennet from Jane Austen’s Pride and Prejudice, seems perfectly appropriate in this milieu, where the up-and-coming middle class – academics, public servants and lawyers – take on the trappings of upper class traditions.

Emma Woods (her own parents having given her such a significant name) has captured the essence of Jane Austen’s sensibility in imagining that Mrs Bennet’s name was Emily and that her father was George Gardiner, the lawyer employed by Mr Bennet’s father, Robert.  Perhaps the quote from Pride and Prejudice which would stir up the mystery of Mr Bennet junior (named James in the play) is at the end of Chaper One:

Mr. Bennet was so odd a mixture of quick parts, sarcastic humour, reserve, and caprice, that the experience of three-and-twenty years had been insufficient to make his wife understand his character. Her mind was less difficult to develop. She was a woman of mean understanding, little information, and uncertain temper. When she was discontented, she fancied herself nervous. The business of her life was to get her daughters married; its solace was visiting and news.

How on earth did ‘James’ Bennet, with the name of kings appropriate to his wealth and station as landed gentry, become married to ‘Emily’ of middle-class pretensions?   At least he managed to have four of his daughters given the right queenly names – Jane, Elizabeth, Mary and Catherine.  But Lydia!  My goodness!

While watching Woods’ play, the question in my mind was how true the characters of James and Emily appeared as their 23-years-younger selves.

I think most of us think of Mr Bennet as genuinely sensible, even wise, and with a quiet ironic sense of humour which we see in his counselling Jane and Elizabeth and his concern about Lydia.  We certainly see Mrs Bennet as so motivated to be upwardly mobile that she fails entirely to have regard for her daughters’ personal development (to use a modern term).  How do these thoughts match the quote above?

Austen’s writing puts us subtley into seeing things from unexpected perspectives.  The first sentence in the quote is the view of Mrs Bennet about her husband.  The rest is Mr Bennet’s view of his wife.

The story in Mr Bennet’s Bride of how Robert Bennet put his son into such a position that James ended up having to marry in the hope of producing an heir to keep the property in the Bennet family’s possession – and how it was his employee’s lower-class daughter that became the only option – makes very good sense.  For readers of Pride and Prejudice it’s even more delicious to realise that James’ marriage to Emily produces only five daughters and no son.  So the property will go to cousin Benedict Collins’ newly-born son (at the time of the Bennet’s wedding) – the awful William Collins, who tries to marry Jane, then Elizabeth, but ends up having to marry the lower-class friend of Elizabeth, Charlotte Lucas.

For readers with an interest in economics and the politics of earned income as against inherited wealth, from the 18th Century onwards, the book you must read is Capital in the Twenty-First Century by the French economist Professor Thomas Piketty, expertly translated into English by Arthur Goldhammer.  He uses Balzac and Austen as very effective observers of the social classes of their day.

But now to the production of Woods’ play.  I have a concern about the characterisation of James Bennet.  Of course, the play needs to be comic in parts to match the satirical elements of the novel, but the costume and manner of James’ role is used in the play to go too close to farce.  It should be funny when he is discovered at the beginning asleep on the floor with ‘a book fallen askew where he has been reading’, but to dress him and play him as a kind of buffoon is not right.  It is true, as Austen wrote from the point of view of ‘Emily’ 23 years later, that she could not understand her husband’s ‘quick parts, sarcastic humour, reserve, and caprice’.  At the age of 29, as ‘James’ confronts his father, these characteristics should be played with much more incisive depth of feeling than I saw last night.

For example there is something close to vindictiveness in James’ saying: Perhaps I am so happy to be still living at home with you, Father? which came over merely as playing word-games for a laugh (from us, of course, not from his Father), when we should have heard the dark edge of attack that would have stopped our laugh promptly as we realised the intensity of his feelings.  Then we could accept more easily how Robert’s sister Mary helps him to see that he has damaged James, and when we find out the story of James’ mother’s death in childbirth, we can have real sympathy for Robert and for James.  And we would also recognise James’ anguish as he realises at the wedding the limited nature of the wife he could not get out of marrying, however ‘pretty’ she is.

Then we can see why, 23 years later, his wife cannot understand him, but he understands her and knows he must treat his daughters with humour, care and concern – as he had been treated by his aunt Mary in place of his dead mother.

My example is only one of many during Act 1.  In Act 2 James appeared almost a different man, but the setting him up beforehand as a comic farce character prevented us seeing the development of his character in a serious way.

I think the script is not the problem here.  It’s a matter of interpretation.  Jane Austen’s comedy is serious; this production of Woods’ play doesn’t come up to that mark.  But it is still well worthwhile seeing as a stand-alone comedy of 18th Century manners and as a cleverly written lead-in (or rather as a post-prequel) to discussion of Pride and Prejudice. 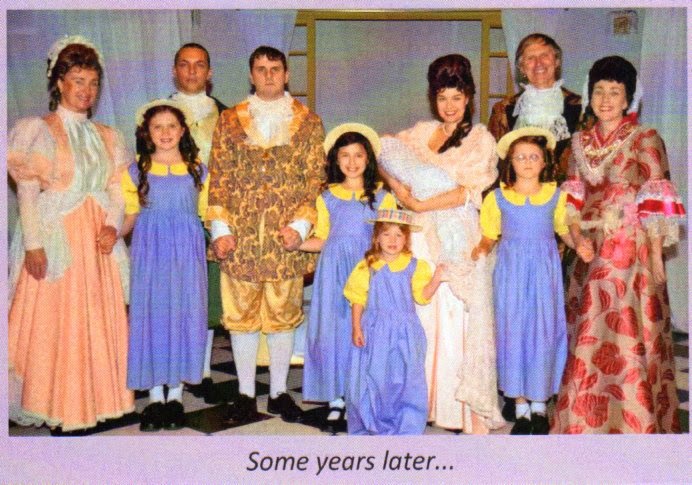