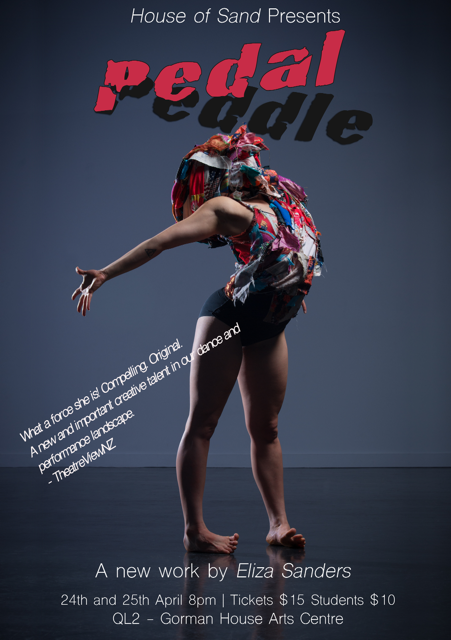 Created and performed by Eliza Sanders


Presented by: House of Sand


A former Quantum Leap dancer, Eliza Sanders has spent the last three years studying in New Zealand. While there she developed “Pedal.Peddle” in which she combines contemporary dance, cabaret and absurdist theatre forms, and which she performed in Canberra as part of curated residency at QL2 Dance.


Into a space strung with clothes lines, a small figure emerges carrying a large suitcase and wearing what appear to be all her worldly goods wrapped around her body. She begins to chant a mantra to remind herself where she has hidden her keys, money and mobile. As she remembers more items to add to the list, the mantra becomes more convoluted and hilarious. She unpacks some of the contents of her suitcase, pegging on the clothes line an assortment of photos and newspaper clippings (memories perhaps?) and eventually an assortment of bras.  Then she pulls from the suitcase an old pair of tights, which she pulls over her head and morphs, surprisingly and hilariously, into a large chicken which scampers around the stage.


The effect is mesmerising as the audience is drawn into an ever more surreal and funny world. The multi-coloured cloth around her body becomes a huge lizard-like tail, and eventually a beautiful flowing train. Through-out all these revelations Sanders  recites existentialist poems and sings unaccompanied songs in a sweet, compellingly clear voice, sometimes to herself, sometimes directly at the audience. Many more such moments occur including a lovely sequence involving a conversation with a mirror masquerading as a pool of water.


Eventually she emerges, almost naked, from the flowing costume as if from a chrysalis, moving confidently around the stage, until the mood darkens, and she returns to the suitcase, removes a large paintbrush, and slowly and deliberately proceeds to paint thick black lines over her body, sometimes using her mouth to manipulate the brush. The effect is unsettling and strangely beautiful.


What to make of it all is left to the imagination of the individual observers, but the journey  is infinitely fascinating, absorbing, compelling, hugely entertaining and beautifully executed.


This review was first published in the digital edition of CITY NEWS on 26th April 2015
Posted by Canberra Critics Circle at 4:33 PM