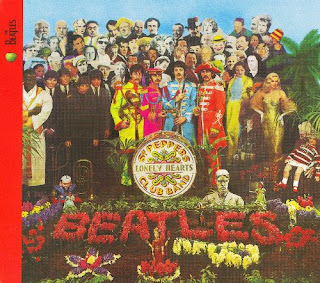 Shortis and Simpson are a Canberra cultural institution. Their tribute shows, satirical performances and original takes on topical and historical events are legendary. Shortis, the songwriter and composer extraordinaire  and Simpson the singer with the versatile and dynamic vocal range never fail to entertain and the full house at Queanbetyan’s Bicentennial Hall for their tribute concert to the Beatles’ groundbreaking seminal album was testament to their talent and the magic of Sgt Peppers Lonely Heart Club Band.
Interspersing anecdote and historical fact, the indefatigable duo, supported by excellent musicians Dave O’Neill, Jon Jones, Ian Blake and Andrew Purdam as well as the Worldly Goods Choir, took us on a nostalgic and informative tour of the seminal LP and its time. June 1 1967 for many of the audience would still be in living memory. We can remember the Vietnam War, the disappearance of Prime Minister Harold Holt in the deadly waters off Portsea. We were still coming to terms with decimal currency and mentally converting it back to pounds, shillings and pence. When the vinyl finally hit the record shops at the end of July in Australia we paid around five dollars or a bit over two pounds. I bought a second hand Zephyr for eight hundred dollars.  There were just over eleven million people in the land and only three years had passed since the Beatles invaded Australia – minus Ringo Starr. I remember it as if it were yesterday. We danced to She Loves You Yeah, Yeah Yeah or Please Please Me Do, and then in 1967 it changed.
Shortis enters sporting a psychedelic Tiedye T shirt and a black headband. Simpson  sported hippy  gear with Sixties beads and blonde hair swept wildly up above her headband.From the very opening title track it was obvious that this was going to be  a magical memory ride through the world of psychedelic melody that would change music forever. In an evening of unforgettable songs from the album, the audience was treated to the classic melodies of When I'm Sixty-four, Lucy in the Sky With Diamonds, Strawberry Fields, Lovely Rita and With A Little Help From My Friends. Alternating, Shortis and Simpson demonstrated their versatility and carefully researched knowledge, informing us of the origin of the title (A salt and a pepper sachet that Paul noticed on a plane journey, and other lengthy titles that bands adopted at the time), indicating inspiration from other leading musos of the era, such as Brian Wilson, Bob Dylan, who introduced them to drugs and their manager, George Martin.
50 Years Ago Today is easy listening with audience seated at tables in the large Bicentennial Hall, drinking from the bar and nibbling snacks. On stage, self-confessed Beatle tragic Shortis at the keyboard and chanteuse with the charm, Simpson at the microphone take us back to a time when the four lads from Merseyside changed the sound of music forever. The one night stand, simply staged in concert style brought out the faithful in force and they revelled in the memory and the sound. Although invited to sing along, they were more content to listen apart from someone behind me, who decided to talk through the linking narrative.
I would have preferred to see the show in a more intimate and more theatrical space In spite of the absence of a visually more sophisticated performance, Shortis and Simpson once again did what they do best – entertain and send audiences away with a smile on the face, a tune on the lips and  for many on the night happy memories of their youth and an LP that turned us all into Beatle Tragics.