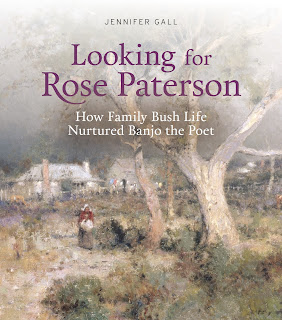 The Australian poet and writer Banjo Paterson spent much of his childhood living on Illalong Station, near Binalong, north of Canberra. Banjo’s father Andrew had owned the farm (along with two others) with his brother until a combination of factors meant the properties had to be sold and Andrew ended up as the manager of Illalong under new ownership. The family, Andrew, his wife Rose and several children lived in the manager’s cottage, made from timber slabs with a bark roof and stretched calico for ceilings.

Rose was an educated, middle class woman, whose family had emigrated in 1840 and, like the Patersons, had taken up farming properties. While managing Illalong paid reasonably well, the family’s physical surrounds were primitive. With Andrew often away on farming business, Rose was left to manage an ever growing household with the only the semi-skilled assistance of a local girl as a servant. For 15 years, from 1873 until 1888 she wrote regularly to her sister Nora, who lived a much more materially comfortable life in Queensland. These lettershave  ended up in the National Library and provide a fascinating glimpse into rural life in Australia of that period from a woman’s perspective. Jennifer Gall has woven the raw material of the letters into a wide ranging view of late-nineteenth century rural life.

The fact that it is Banjo Paterson’s mother writing the letters means we know a lot of the ‘back story’ of where the family fits into the society of the period, due to the several bjographies of Banjo. We would not have that back ground with more anonymous. For all that, Banjo is little more than a vague figure in the background of this book. It is about Rose and more broadly the hard life of women living in the isolation of rural communities.

Gall uses the letters as the starting point of explorations of various facets of bush life: pregnancy, childrearing, medical and health issues, domestic management and education. There is little of the heroics of Clancy or the Man from Snowy River, this is a grim picture of a hard life. Yet through all of this, there is a sharp intelligence and a wonderful sense of humour in Rose’s letters to Nora.

Rose was dead by the time she was 50, simply worn out, one can imagine, by living the life she did. Her letters and Gall’s detailed work in placing them in the wider social context of the period have ensured that she will be remembered as more than simply Banjo’s mother.
Posted by Canberra Critics Circle at 6:49 PM