The Addams Family - The Q 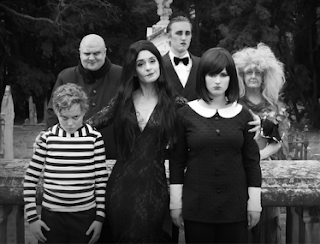 If the Addams family had been in the audience, they would have hated this musical.  It's sentimental, formulaic, and consistently plays it safe.  Strip out the references to murder and torture and you would have a pretty solid Brady Bunch musical.

The less you care about The Addams Family, the more likely you are to enjoy this production.  If you only vaguely remember the TV series, you will have a delightful time enjoying the catchy songs and decent performances in a carefully packaged nostalgia trip.

But for those seasoned on the excellent movies or the cartoon, it is hard not to notice how blunt the horror is: this is a monster with its teeth pulled, an attempt to widen the appeal of The Addams Family that strips it of a lot of its energy and resonance.

The paradox of this particular production is best defined by Wednesday Addams, excellently sung and performed by Rachel Thornton.  But while Thornton is fascinating in the role, the script mangles the character more thoroughly than Pugsley after a session on the rack.

The central conceit of the musical is that Wednesday has fallen in love with a boy and now wants her family to give her "one normal night", while she moons over whether she's too crazy to be with him and sings about her newfound interest in unicorns.

Rather than the severe and self-possessed Wednesday we should have, we have a generic bratty teen who is both less inspiring and less interesting.

The book by Marshall Brickman and Rick Elice deserves some praise for trying to find sources of tension in the Addams family to craft a story for the musical, but not for its relentless recourse to cliché.  The Wednesday plot is "Guess Who's Coming To Dinner" with Wednesday bossing her father into keeping her engagement a secret from his wife.  This prompts further absurdities, with Morticia and Gomez's perfect marriage now on the rocks because Gomez might be keeping a secret from her.

Gomez and Morticia also feel not quite right.  Laine Hart captures Morticia's poise, but partly because the script paints her into a corner the character is defined by a weary sense that she has married below her station.  Gomez meanwhile as played by Gordon Nicholson has a lot of energy but not the charisma we expect for the character.  Rather than the passionate romance of two soulmates, we have an ageing father struggling to mollify his high-maintenance wife.

Tim Stiles has more success with an on-point Uncle Fester, and his ongoing romance with the moon is a high point of the show.  Grandma (Barbara Denham) also enjoys her freedom to be a kook, and young Callum Doherty as Pugsley Addams made something of the contrast between his cherubic innocence and his twisted declarations.

The "norms" who visit the Addams manor stand out with well-judged performances, especially Joseph McGrail-Bateup and Deanna Gibbs as the Beinekes, although their character arc is so predictable it could have been lifted from a TV movie.  However despite this the pair felt quite authentic and believable.

The chorus of deceased Addams family members was also very entertaining, with particular nods to Miriam Miley-Read and Madelyn White for playing these ghosts as though they were actually dead, an infusion of horror the show badly needed.

There were definitely moments where the show captured the proper Addams Family spirit - I am thinking in particular of Morticia's cheerfully morbid song "Death Is Just Around The Corner".  Less successful was "Pulled" which has a highly distracted Wednesday delivering lacklustre torture to Pugsley.  Generally the tone of the music was wrong.  The closing song "Move Towards The Darkness" felt gently reassuring, a nod that this was just good fun, and that we should laugh at the Addams Family rather than being afraid or admiring.  The music didn't need to be Sweeney Todd, but a more jarring and discordant note would have provided a much needed thrill and sense of danger.

Ultimately, Director Stephen Pike does a decent job with what is essentially a second rate musical, an attempt to capitalise on trendy nostalgia that dilutes the identity of the source material to appeal to the widest possible audience.  The Addams Family will entertain, but it will only shock, creep or chill the most timid.

It seems obvious to make the Addams Family a riff on what it means to be normal, but the Addams Family are too sure of themselves to have any vested interest in that debate - fundamentally, they don't really care whether you think they are normal, they are just living life the way they want to.  Norms visiting the Addams manor should not be allowed to pontificate like this about the supposed importance of their values without being eaten by one of Morticia's carnivorous plants or at minimum slightly maimed.  Now if Wednesday's paramour had died and become one of the ghosts - that would have been more in the Addams spirit.
Posted by Canberra Critics Circle at 9:59 AM