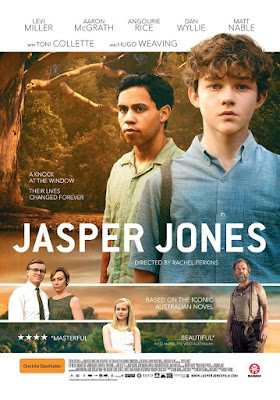 The film of the popular novel by Craig Silvey is not so much about Jasper. It’s about his loyal, younger friend during a life-changing moment while growing up. So, it’s yet another Aussie tale about coming-of-age? Yes, but the difference is that it firmly references the here-and-now and what is shaping our lives today.

Charlie Bucktin (Levi Miller) is a 14-year-old with his life choices ahead of him. Right now, what exercises him most is what book to read and how to bump into a certain young lady, accidentally on purpose.

Then Jasper (Aaron L. McGrath) comes tapping on his bedroom window, a pair of eyes peering through the louvre window one evening. It’s an odd shot that hovers between the dramatic and the comic, and the scenes that ensue are a rather wobbly beginning that pitches Charlie into a deeply compromised situation. We never get to fully understand his motivations. The assistance he provides Jasper implicates him in ways he could not begin to imagine at his age.

The two teenagers live in a town somewhere on the wheatbelt in Western Australia where Jasper, the child of a white man and Aboriginal mother, is deemed an outsider. In 1969, it has been a short while since the referendum that fully recognised Australia’s Aboriginal people.

Corrigan is relatively prosperous, a comfortable, seemingly safe place where people can afford a Holden car and their own house. Some of the outside world intrudes, however. There’s a war in South East Asia and the Vietnamese family of Jasper’s good friend Jeffrey is having a terrible time at the hands of town racists. Sweet, young Eliza Wishart (Angourie Rice), Charlie’s crush, is reading Truman Capote.

It is a telling moment in history to return to. Not so long ago, but it seems like absolutely ages since the closed-in verandahs, the neatly-mown front lawns, and the jaunty cars of the 1960s. On one level this can be a nostalgia trip. On the surface, Corrigan is the kind of place that lives in the collective memory of people of a certain age. But below the images of old Australia beautifully captured in the cinematography, the film exposes harsh and shocking truths that challenge the impulse to nostalgia.
The kids have to deal directly with the town’s problems, while the adult characters seem somehow absent without leave. Hugo Weaving’s ‘Mad Jack’ is also an outcast living on the outskirts of town, but conflicted and ineffectual. Toni Colette, all beehive and bold eyeliner, does a familiar turn as Charlie’s mental mum, a woman unhappy in her marriage—though again we don’t quite understand why. Dan Wyllie, sympathetic as Charlie’s dad who spends most of his time closeted away writing his novel, is the good patriarch in absentia when all goes wrong.

On the other hand, the terrific young actors, Miller and Rice in particular, have to convince us they have been witness to horrific of events that must remain secret while they go about their business. They give little sign of being traumatised by it. Strange. Director Rachel Perkins (Bran Nue Dae) did not pursue the dark subtext of this story for all it was worth, choosing instead to keep things light where possible, but therein lies some incongruity.

Jasper Jones is a mixed bag, satisfying in parts. What a different story it would have been, if it had been Jasper, the kid of colour centre frame, with his friend Charlie on the sidelines.