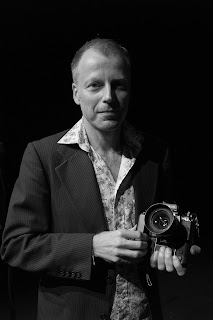 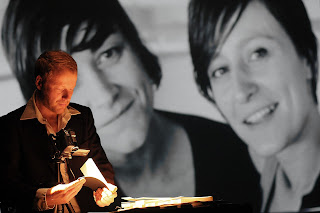 I can remember with affection and boundless curiosity the machines at the sideshow that would animate still photos in a moving image of life. This early form of animation could keep me fascinated in its intricate subtleties of facial expression and physical gesture that were in so many ways different to the cartoons that were precursors to Saturday matinee main features.. And so it was that I was intrigued to discover again that magical world through Volker Gerling’s presentation of his flipbook films, taken by his trusty Nikon while on walking travels through Europe and chiefly his natïve Germany.
During his walks, and on a variety of other occasions, Gerling would invite people that he met to pose for their photo. Rather than one frame, his analogue film would shoot them for twelve seconds during which time a variety of expressions and movements might reveal the character and personality of his subject. During his show, Portraits in Motion, Gerling would either introduce the person in the photo and talk about them, or in other instances flip through his photos beneath a video camera and later reveal aspects of their lives. The flipbooks then become items on his travelling hawker’s tray that he shows to people along his journeys.
What is particularly remarkable is his passion and devotion to learning about the art of flipbbok filming as well as the sacrificial act of relying entirely on his art to survive. He takes no money with him on his walk and relies entirely on the good will of his subjects or their generosity in paying him money voluntarily or purchasing their personal flipbook. He lives by modest means in a modest and cheap apartment and spends his life meeting and photographing people from all walks of life.
Through his flipbooks the audience also encounters a variety of characters. There is the thirteen year old girl who hates her freckles because they look like pimples and the same girl at nineteen who accepts her freckles because they hide any pimples. There is the woman at the bar who unabashedly removes her top. A group of workers crowd around a flipbook; two men and a woman live happily in an open marriage. A young boy is filled with pride at knowing that only he will be photographed. A woman reveals the pain of cutting her hair after the deaths of her father and brother and the break-up of a relationship within a short space of time. In a street in Poland there is proof that the world wil not end because of the Millennium Bug. 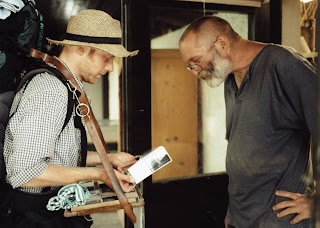 Each flipbook shifts between the expectant and the spontaneous. True response emerges in a split second before returning to the neutral expression. Time is variable but constant, slowed down or sped up depending on the gaps between the flips. The Berlin tower appears and disappears in an instant. Blades of grass move behind the still motion of a boy on a river bank. Gerling takes us beyond the expected to expose the unexpected and with shifting consciousness view humanity in all its surprise and complexity.

As a child, I was also exposed to endless slide shows of people’s travels. Portraits in Motion confronts a similar dilemma. Gerling repeats the action several times to reveal the nuance, the subtlety of the shift in his subjects’ emotions and attitudes. This is complemented by the anecdote, but it risks disinterest. As the presenter of the slide show harbours the fascination of personal experience and the enthusiasm of imparting that experience to a captive audience, so does Gerling risk the wandering attention of those less captivated by someone else’s “slide show” no matter how unique it may be and there is no denying that Gerling’s presentation, his subjects and the life he leads to pursue his art are unique in an unique show. In short, the presentation is too long and could easily have greater impact in only an hour.
At the end of his show, Gerling invites audience to flip through his books and perhaps ask him to make a flipbook of them for a modest price, possibly on the banks of the Torrens River. A modest fee will ensure that you can enter his thoughtful and reflective world, discover more about yourself and also assist him to continue his flipbook travels for many years to come.
Posted by Canberra Critics Circle at 10:08 AM