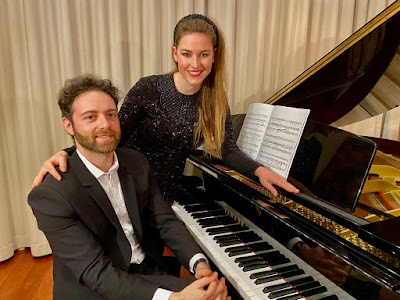 To paraphrase the familiar proverb “It’s an ill-wind that doesn’t blow somebody some good”. In this case it was Canberra music lovers who benefited, as a direct result of Covid-19, from two sold-out performances by soprano Eleanor Lyons and pianist, Vladimir Fanshil.

Though both are Australians, the husband and wife now live in Vienna, where they are forging International careers; hers in opera and his as a conductor.

Earlier this year, together with their small daughter, they travelled to Australia for Lyons to fulfil a long-held ambition to make her Opera Australia debut in the Sydney Opera House, as Donna Anna in “Don Giovanni”. As well as her highly acclaimed operatic performances , Lyons also  performed 13 concerts for Opera Australia, completing these just weeks before Covid-19 struck.

Fanshil had returned to Europe, ahead of his wife, to fulfil an engagement to conduct a concert for the Bilkent Symphony Orchestra in Turkey, and prepare for the launch of the Odessa Festival Orchestra, which he founded in 2019, at the inaugural 2020 Beethoven Festival in Odessa.

Lyons had planned to join him, with their daughter, as soon as her Opera Australia commitments were completed, as she also had a string of important engagements in Europe to undertake.

As the pandemic began to take hold in Europe, opera houses and theatres closed resulting in cancelled engagements for both artists, and when the Beethoven Festival was cancelled, Fanshil made the decision to return to Australia to be with his wife and daughter, and the  young family founded itself stranded in Sydney.

But rather than being daunted by their predicament, Lyons and Fanshil, taking inspiration from such illustrious predecessors as Melba, Sutherland and Bronhill, who took their music to the people, hit on the idea of presenting intimate micro-concerts in private homes reminiscent of salon concerts of old, and as news spread, found themselves on tour with concerts scheduled in homes and venues in Sydney, Canberra, Armidale, Yass, Griffith, Wagga Wagga, Merimbula and Orange.

Their program, as presented in the Wesley Music Centre, offers an eclectic mix of operatic arias and rarely heard art songs, presented with an engaging lack of formality, with the artists taking turns introducing each item.

Wearing a glamorous full length silver sequin gown, Lyons immediately captured the attention of the audience, entering from the back of the room, with a sparkling rendition of Musetta’s Waltz from “La Boheme”, for which Fanshil obligingly contributed some short tenor passages. She continued with two lovely pieces by an obscure Russian composer, Reinhold Gliere, which Fanshil assured the audience were the best moments of a rather long obscure opera.

As the concert progressed it became obvious that Fanshil, in addition to his obvious keyboard talents, was also an engaging raconteur, as well as a poet, affectingly setting the mood for each of the arresting five Grieg songs, which concluded the program, with a short poem.

Having already demonstrated his skills as an attentive accompanist, Fanshil delighted with his solo, a thoughtfully shaped interpretation of the demanding Rachmaninoff “Elegie", op.3”, following which Lyons re-joined him for a delightfully effervescent rendition of Rachmaninoff’s “Spring Waters”.

A sublime “Morgen, op 27 no. 4”, by Richard Strauss, preceded the afore-mentioned five Grieg songs which brought the recital to a very satisfying conclusion. But wait there’s more – the encore - for which Lyons, as if expressing her defiance of Covid-19, electrified the audience by unleashing the full power of her voice in a thrilling rendition of Verdi’s “Sempre Libera” (Always Free) from “La Traviata”.

This opportunity to see two world class artists, at the peak of their careers, in such intimate surroundings was something that few, who were lucky enough to experience it, are likely to forget.

This review first published in the digital edition of CITY NEWS on 27th September 2020.