On the first three Saturdays during August, Water Walks were held as an event in RISE Canberra's festival, the Where You Are Festival, funded by the ACT Government. Two walks were undertaken after and during heavy rains. On the fifth Saturday of August an exhibition of photographs taken during those walks went on display in the gardens at Photo Access and a splendid book of the exhibition went on sale. That must be some kind of record for bringing an exhibition together! Everyone who had endured the inclement weather of the walks was rewarded by a beautifully sunny and warm afternoon.

Water Walks brought participants together to explore, document and share experiences of three creeks. Each group was accompanied by a lead photographer, and a local ecologist, historian or urban planner. They spent four hours exploring, learning about and photographing a waterway. In advance, and as they first walked, they learned about the environment, history and cultural significance. Then, walking back, they created photographic records. Local writer Cameron Muir recorded observations along the way; from which came a delightful “field notes” essay to accompany the virtual exhibition and for inclusion in the book. 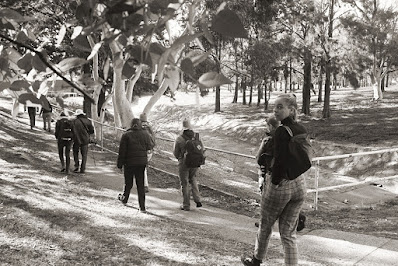 Image of a walk in action! - supplied by PhotoAccess

Participants learned that thousands of pieces of evidence of Ngunnawal ways of life and ownership are located along Weston Creek. Nearby reserves support patches of the original grassy woodland and the threatened native bird species. Now it has been re-made, including becoming part of Canberra’s first sewerage treatment works - much of its 5 Km goes underground or through a concrete stormwater drain.

Ngunnawal people named it Girimbombery or Giridombera, this ceremonial pathway guiding visitors from the south to the central corroboree ground on the floodplain that some of us remember - now under Lake Burley Griffin. Where this Jerrabomberra Creek joins the Molonglo, wetlands provide a globally significant habitat for migratory birds. But most of the creek’s reaches remain out of sight in the urban fringes immediately adjacent to them. Widespread clearing has significantly degraded the ecology.

Sullivan’s Creek flows through grassy woodlands, former grazing land, tunnels, drains and constructed wetlands. Aboriginal people experienced extreme environmental changes in this landscape, including the Last Glacial Maximum about 20,000 years ago when freezing temperatures on the catchment’s mountains shattered rocks, some of which tumbled down and lie still on the lower slopes.

​Walk participants listened to natural music, were reminded that water flows into irrigation channels to grow food we purchase, explored a subterranean tunnel’s wet surfaces, and parted wild fennel’s feathery leaves like they were walking among shoulder-high carrot tops. They also created images that show beauty, acknowledge some history of Ngunnawal life, and celebrate practices of care. Their images tell stories of people and water in our city.

The exhibited images are mounted on metal stakes embedded into the ground of the gardens outside the gallery premises and visitors walk amongst them. The stakes can, and no doubt will, be used again for more garden exhibitions in the future. 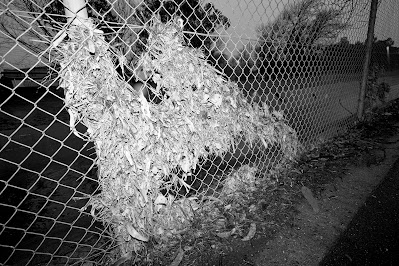 Whilst many might be described as documentary, other images in the exhibition are very much artworks. I particularly enjoyed two works by Noel Hamey: Life in Stagnant Waters and Valley of Stone. 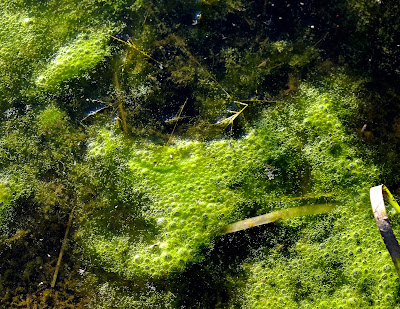 Pond with Poles by Sarah Ryan​ is the best of several delightful reflections. Christine Pearson’s Power of Water and Bob Gardiner’s delightfully titled Early Qbnian Dyathinkesaurus Fossil are both splendid. Latent by Thomas Edmondson is a fine Contemporary image. 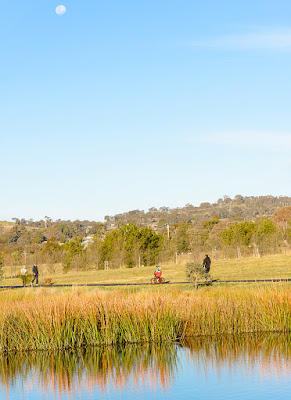 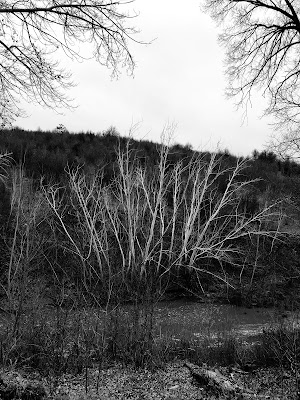 I commend everyone involved in creating this exhibition and its informative accompanying book.

This review originally published in The Canberra Times of 5/9/20 here.