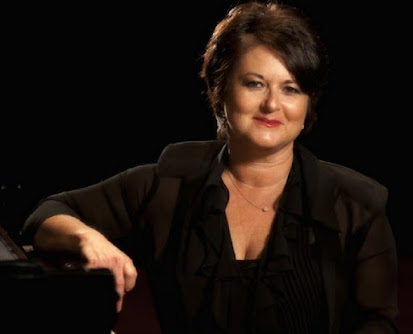 It was unfortunate that violinist, Natalie Chee, due to play in the Selby & Friends concert at Llewellyn Hall, had become yet another victim of Covid this week.  Luckily, violinist, Dimity Hall, was able to replace her and join Kathryn Selby and Julian Smiles for this Canberra concert.

The concert commenced with Australian composer, Miriam Hyde’s Fantasy Trio in b minor, Op. 26.  Composed in London in 1933 when Hyde was aged 20, this is a short but beautiful work full of emotion and reflection.  It was beautifully played by the trio.

The second item was to have been a work by Anton Arensky but, because of the artist change, it was replaced with Beethoven’s Cello Sonata no. 5 in D Major, Op. 102, no. 2.  Kathryn Selby and Julian Smiles performed it.

The performance of this work was outstanding.  Julian Smiles’ cello playing of the quietly emotional second movement was clearly heartfelt and both he and Selby gave the impression that they were sharing something profound.  They also clearly enjoyed playing the jaunty and bright third movement.

After interval, the trio played the concert’s showcase work, the Piano Trio in B flat major, Op. 97, "Archduke", composed in 1810-11.  It was dedicated to Beethoven’s patron and friend, Archduke Rudolph of Austria.

Both the first movement, with its familiar romantic melody and the contrasting light-hearted second movement were skilfully played.  The third movement, with its ethereal quality was played with great feeling and was the highlight of this work.  The boisterous and fun fourth movement brought the concert to a satisfying close.

Dimity Hall is well known to national and international audiences as a member of both the Goldner String Quartet and the Australia Ensemble at the University of New South Wales.

Julian Smiles has been a central figure in cello performance and teaching in Australia for over 25 years.  He grew up in Canberra, studying with Nelson Cooke at the Canberra School of Music.

Kathryn Selby is the Artistic Director and founder of the popular nationally touring Selby & Friends concert series.  Studying at the Sydney Conservatorium and in the USA, she has been a driving force in the Australian classical music industry since 1989.

This review was first published in the Canberra CityNews digital edition of 22 July 2022.