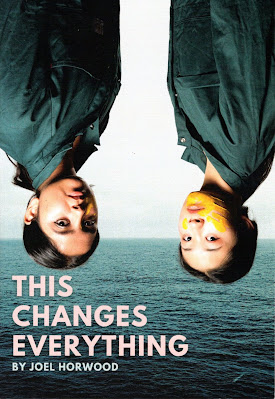 The idea is interesting, especially for the inaugural production by Echo Youth.  Young people meet online, disillusioned with the state of the world, and (quite impractically) relocate secretly on an isolated platform way out in the ocean.  There they expect to create a new society.  Perhaps they can change everything.  But they discover they are in the same boat as the rest of us – isolated on our only planet with all our human failings.

Klara, Kim and Alva manage to find The Community.  Kim brings a taser, with dire consequences later in the play.  They are talking to Eve and Evie:

ALVA. We’re looking for a place called ‘The Community’.
KLARA. Of course it’s ‘The Community’, Alva, they’re living
in the middle of the sea!
ALVA. Right. Wow. This place is like an urban legend.
As if watching a movie, EVE and EVIE open a bag of crisps
and begin sharing them with each other.
KLARA. She means that when you all disappeared, it was on
the news, on the front of papers, all these theories about how
you’d all just vanished. All on the same day. There were
some clues, not many, but some and these rumours started,
about a place called ‘The Community’.
ALVA. We’ve been trying to find it for ages.
ALI, EBBA and BASIC JANE arrive to watch. ALVA,
KLARA and KIM feel the pressure

On paper, the script may be promising for teenagers to use for its ideas.  But without trained actors the play easily becomes a lot of talk and little believable dramatic action, because characterisations are cardboard cutouts.  I often could not pick up what they were saying.  I didn’t feel the pressure along with Alva, Klara and Kim, though I could see what the characters were meant to be feeling.

The set design – apparently an abandoned fossil-fuel oil rig – could have made an ironic note.  But the attempt at realism was unbelievable, when pairs or small groups met to talk on apparently floating pods, and people could walk off the platform and disappear in all directions.  The result of this design was a complete lack of focus for the action.  Much of the speech was too fast and emotionally black or white, and often hardly understandable.

Perhaps the symbolism of the situation would have worked better on a plain, empty stage with an imaginary boundary within which all characters had to be present, with the emotional pressure rising after the boats were taken by those who wanted out.

The basic message about the need for the world as we know it to be changed for the better was obvious from the beginning, and the ending made it clear that change can only happen by working from within the whole world community.  But without characters for whom we could feel empathy, this presentation of This Changes Everything left me without any hope for the future, despite, as Jordan Best describes them, “this astonishing cast of smart, funny, engaged, socially and politically aware young actors”.  I appreciate their efforts and the sincerity of their intentions, and hope they have opportunities to develop more subtlety and depth of character in future drama work.

Posted by Canberra Critics Circle at 10:23 AM