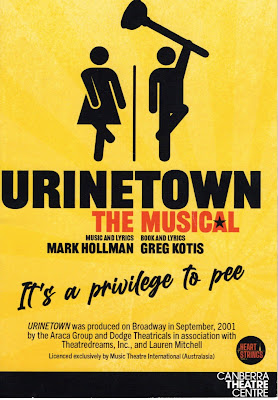 
To describe Urinetown The Musical as farcical is, of course, to give the play and this production in particular a great compliment.

As Wikipedia says: “Urinetown: The Musical is a satirical comedy musical that premiered in 2001, with music by Mark Hollmann, lyrics by Hollmann and Greg Kotis, and book by Kotis.  It satirizes the legal system, capitalism, social irresponsibility, populism, bureaucracy, corporate mismanagement, and municipal politics. The show also parodies musicals such as The Threepenny Opera, The Cradle Will Rock and Les Misérables, and the Broadway musical itself as a form.”

I’m sure I heard a bit of West Side Story in the music as well.

Interestingly, although the acoustics for amplified voices over an extraordinary live band were sometimes difficult in the Courtyard Studio, I thought the frantic style of this production probably worked better for a small audience in a confined space than it might have in a bigger theatre like the Playhouse – and it would have been lost in the 2000 seat main theatre.

We felt personally engaged by Karen Vickery’s police officer/narrator Lockstock.  Barrel was there too, but their (gender was sometimes fluid in this show) manner towards us as well as to the cast (note the Brechtian alienation effect) and towards the characters was certainly a case of lock, stock and barrel (note the gun violence imagery).

And as well, the sincerity (as actors) of Petronella Van Tienen’s Hope Gladwell, of Max Gambale as her purely profit-making father Mr Gladwell, and perhaps even more in Joel Horwood’s presentation of the honesty in Bobby Strong, with strong support from Natasha Vickery as Little Sally and Deanna Farnell as Penny Wise, carried the drama sufficiently beyond simple farce.  We could even begin to believe in Hope’s recognition of her father’s iniquity and the need to remove him from her life – literally – in honour of her true love, Bobby, killed by police violence upholding ‘the law’.

The quality of the singing was exquisite, despite such complex yet marvellous choreography, matching the amazing range of musical effects from the band – from grand opera, through Southern Baptist spiritual, to trad and modern jazz.  This Urinetown The Musical is a joy to watch: an amusing farce with satirical implications, showing up the modern political economy.  But thanks to the goodness of heart of the Canberra Theatre Centre, I had three free pees before, at interval and after the show.  Very satisfying, and full of hope for another new Canberra artistic upwelling, Heart Strings Theatre Company.