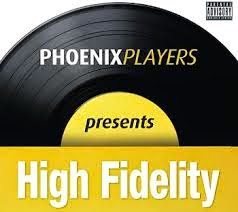 If coarse language and gross-out comedy rings your bell, then you’ll find much to amuse you in Phoenix Players latest offering.

First time directors, Sarah Hull and Nathan Patrech, have assembled a strong cast, led by Zach Raffan, impressive as Rob, the self-absorbed proprietor of a run-down record store, with a penchant for making lists and indulging in an active fantasy life.
The show starts out promisingly enough with a well-staged opening number, in which the audience is introduced to Rob’s various employees and customers. Amanda Green’s clever lyrics and Tom Kitt’s inventive score catch the ear with songs that pay homage to a various recording artists such as Bruce Springsteen, Aretha Franklin, George Harrison and The Who.
Jenny Tabur’s excellent rock band captures the mood of each song, thankfully played at a level which allows most of the lyrics to be heard. Anita Davenport and Steve Galinec’s rather gloomy setting works well enough, and Jennie Norberry has provided a variety of appropriate costumes.

However, after the first half-hour, it’s downhill all the way, despite the best efforts of a strong cast  which includes Max Gambale, Will Huang, Josie Dunham, Miriam Miley-Read, Amy Dunham, David Cannell, Emily Ridge and Anthony Simeonovic, between them playing a variety of repellent characters who require rather more inventive and imaginative direction than on show here, to make them palatable.

Jordan Kelly’s repetitive video-clip movement added little to the proceedings, nor did a shocking scene in the second act involving the close-range shooting and abuse of one character by the principal actors, meant as comedy, but which drew shocked gasps from the audience.

Phoenix Players should be commended for attempting a reasonably contemporary musical; however, it is disappointing to see so much talent and enthusiasm squandered on such unrewarding material.
This review was published in the digital edition of CITY NEWS on 7th February. It will appear in the print edition of CITY NEWS on February 11, 2015.