I’ve always avoided seeing stage plays based on beloved TV shows.  Why watch a rehash of an old TV show on stage with actors trying and failing to be like the originals?  ‘Mother & Son’, based on the TV series of the same name, is surprisingly enjoyable.

In this completely new play, writer Geoffrey Atherden has a lot of new things to say about the characters and the situation of Arthur Beare who’s stuck with looking after his ageing mother, Maggie.  We’re now in the electronic age and Maggie is floundering with mobile phones, DVD remotes, phone charities, Skype and emergency phone monitoring companies.  Arthur has met someone he wants to marry but the cards remain stacked against him.

The show has a high-powered cast who play it superbly.  It took me about twenty minutes to get used to different actors playing the roles but when it was clear they were not trying to copy the originals, the play took off for me.  Noeline Brown is brilliantly funny as the mother, Maggie, and Darren Gilshenan gives a superb performance as the son, Arthur.  I was particularly impressed with Nicki Wendt as Liz, the snobbish daughter-in-law, and Rob Carlton was wonderfully oily as the conniving favourite son, Robert.  Rachael Beck beautifully played Arthur’s new girlfriend.  There was nice work, too, from Robyn Arthur and Sharon Davis in two key minor roles.  Liz’s horrid children, played by Dylan and Jade Redman, appear only on video, but their accurate performances got some of the biggest laughs of the night. 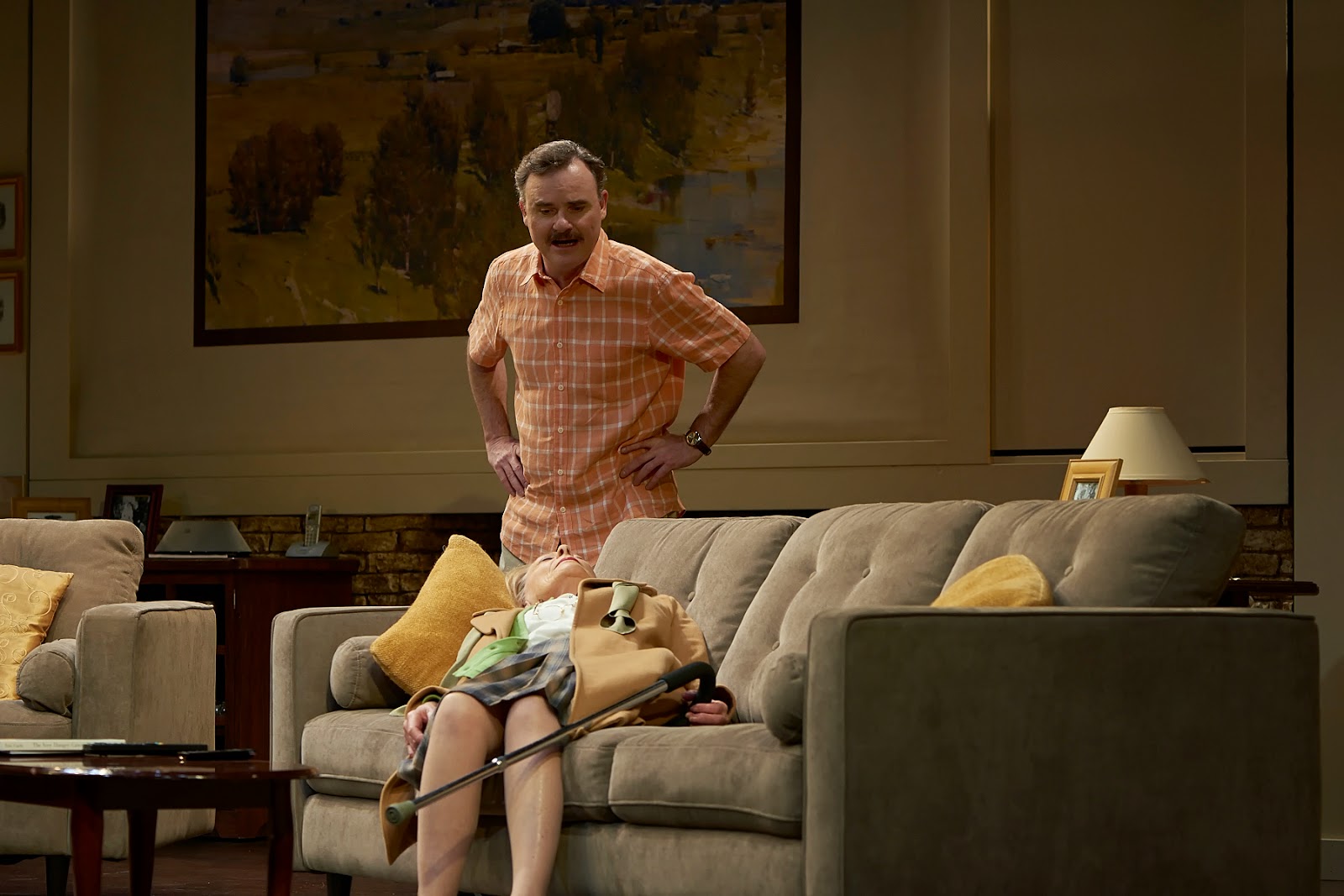 The vast open plan set by Shaun Gurton is cleverly dressed with fittings and furnishings that, though well-kept, are crying out for an update.  It’s exactly what you’d expect in the home of an elderly lady who doesn’t like change.  The square sides of the set will create some sightline issues, though, if you’re sitting away from the centre of the theatre.  Lighting by Nigel Levings complements the set design very well.  Costumes by Esther Marie Hayes have been very well chosen for everyone in the show.  You’ll love Maggie’s track suit.

Director, Roger Hodgman, has done a fine job.  He has it all moving along swiftly and, by giving us small scene changes to a dentist’s office and a respite care facility as well as video showing Skype sessions between Liz’s children and Maggie, he gives us a break from the main set which keeps it visually interesting throughout.

Writer, Geoffey Atherden, has given us a delightfully funny and quite moving show which doesn’t shy away from the serious issues that arise from caring for an aged relative and dealing with selfish relatives.  He has a lot to say about the current electronic world as well as new insights into his wonderful characters.  I was particularly impressed by the ending of the show but I’m not going to spoil it for you.  I was always a fan of the TV show and expected to be resistant to it as a stage play.  I really enjoyed it and you’ll have a good time with it even if you never saw it on TV.  I recommend it.

Posted by Canberra Critics Circle at 11:04 AM