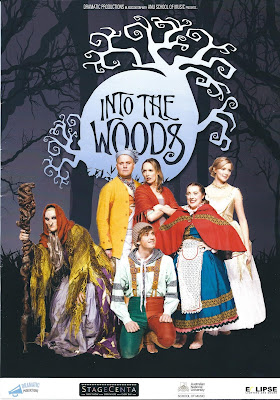 Stephen Sondheim’s, ‘Into The Woods’ is a deceptive mix of fairy tales leading at first to Happy Ever After but then showing what happens to the characters after that.  With contemporary street-wise sensibilities, the characters are easy to identify with and the modern morals of the story are relevant and poignant.

Richard Block’s production uses the sets and costumes from a production staged by the Victoria Opera.  The costumes are dazzling and colourful and the golden forest set hovering over the action gives a great sense of place.  It would, however, have been better to have an atmospheric backcloth rather than the blank low screen masking the orchestra upstage.

Damien Slingsby has done excellent work with the musical direction and his orchestra play the difficult score very well.  Sound balances between singer and orchestra were fine and, for the most part, the singers’ diction had the necessary clarity.  Despite some first night glitches, the lighting by Hamish McConchie has been well-designed to give the show a good atmosphere.

There’s great ensemble work as well as some standout performances from the large cast.  Kelly Roberts gives a strong performance as the Witch, acting and singing with confidence and skill.  Philippa Murphy is an appealing and dramatic Cinderella whose singing of ‘On The Steps Of The Palace’ is a highlight of the show.  Alexander Clubb does his best work ever as Cinderella’s Prince, with fine singing and a great comic performance.  Grant Pegg as the Baker sings superbly and captures the emotions of this character’s journey extremely well.  Veronica Thwaites-Brown gives a clever performance of ‘Moments In The Woods’ and Pippin Carroll is a delightfully dopey Jack with a great solo, ‘Giants in the Sky’.  Everyone else in the cast has their moment to shine and do so very well.

Richard Block keeps the pace moving briskly but often at the expense of some of the best jokes which needed more punch.  The cross-over wise comments by the cast were often inaudible.  Some of the solos would have been more powerful if staged with less movement.  The dancing in the first and second act seemed to be mindless dance for the sake of it instead of enhancing the action.

Dramatic Productions pays their cast a small up-front fee plus a share of any profits, so the question needs to be asked – is this a professional standard show?  No, it isn’t, but it’s a show that is right up there with the best of recent local musical productions.

I believe this is the first use of the Gungahlin Theatre by a local theatre company.  From an audience point of view, it’s a nicely appointed theatre with good sightlines, very comfortable seating and a large, inviting foyer.  It’s easy to find and has plenty of parking, too.

Richard Block’s production of ‘Into the Woods’ hopefully breaks the Canberra drought of musicals with music and lyrics by Stephen Sondheim.  Considered box office poison in this town after a major loss-making production of ‘Sweeney Todd’ in 1986, Sondheim’s works require more concentration by audiences than other musicals with their complex music and intricate lyrics.  However, once you ‘get’ a Sondheim musical, you can’t have enough of them.

Photos by Len Power (NOT taken during the opening night performance!)


Len Power’s reviews are also broadcast in the ‘Artcetera’ program on Artsound FM 92.7 on Saturdays from 9am.
Posted by Canberra Critics Circle at 11:20 AM