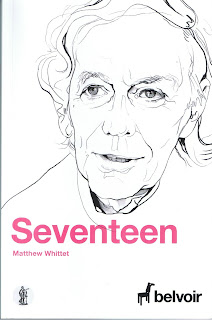 It’s quite disturbing reviewing the work of a bunch of actors who are all around my age – 74½ – when they are playing 17-year-olds trying to celebrate their exit from high school.  The exception is Genevieve Lemon playing Mike’s 14-year-old sister.

Knowing my own physical incapacities I was amazed how well my confreres could still move in the wild ways that I can, just, remember from when I was 17.  It shows you what actor training can do for you.

The play is a hoot, as you might expect; but it’s not just a hoot.  Whittet has done his homework interviewing today’s 17-year-olds with these questions:

What matters to me right now is…
What or who do you want to be when you are older?
Can you imagine life at 70?  What might it be like?
The advice I would give to my older self would be…
What do you daydream about?
What does love mean to you?
Regrets – do you have any?  If you are happy to, can you share what these are?
The message I would send to the rest of the world right now is…

The value of the Program is that it includes the Writer’s and Director’s Notes and also the text of the play which has been a cooperative venture involving the author, the actors and director, the actor Judi Farr (who is not in the performance) and the dramaturg Anthea Williams.

This certainly is an original project, so what was Whittet hoping to achieve and has it worked?

Well the audience on this occasion certainly thought the show worked, responding in a very lively manner to every twist and turn in the relationships being played out at the all-night hang-out in the local children’s playground, the scene particularly of the first meeting of Mike and Tom when they were 11 and their friendship was established.  What happens as the night wears on turns from a naïve attempt at celebration into a bumping up against reality – both sad and encouraging for each character according to their personality, proclivities and social circumstances.  It’s not just a hoot to have no choice but face the prospect of growing suddenly into adulthood.

I still felt a bit uncomfortable with the author’s intention, though.  He has set the play now, not in 1956 when I finished Fifth Form, yet somehow it seemed to me that the characters were more childish than I remember being (though I’ll admit to some very weird behaviour), and more so than the many Year 12s I taught in the 1960s to the 1990s (many of whom turned 18 before finishing their sixth year of secondary schooling).

Whittet has written about the passion [that] is always there just under the surface.  Waiting to erupt like a volcano….So having said this, it’s been a very important decision to set the play now.  A now that is not concerning itself with the thorniness of Snapchat and Facebook, but more with the burning questions under the surface for these kids.  Questions that were asked yesterday, today and I think will be asked well into tomorrow.

At the same time he just seems to have been fascinated by the idea that I didn’t want these characters to be played by teenagers.  I wanted them to be played by actors in their 70s – theatre elders who would get a chance to do something that is rarely asked of them….[and] to get the chance to watch incredible actors like Peter Carroll, Maggie Dence, John Gaden, Barry Otto, Anna Volska and Genevieve Lemon … wrestle with the questions: What does it mean to be 17? How do I say goodbye to the people I love? How do I say goodbye to the person I was?How do I become the person I should be?…This to me is what makes it such a thrilling piece to be a part of.

I think these “incredible” actors did a highly creditable job of creating the characters that the dialogue and plot engendered for them to work on, and made a thoroughly enjoyable show, but in the end perhaps more time than 90 minutes is needed to invest all that depth of meaning into the drama.  And probably for a modern young adult audience more subtlety and emotional understanding would be achieved by young actors, many of whom are just about as “incredible” as their elders.

So I conclude that the show is a success and very worthwhile seeing for its original idea – and to see these actors at their credible best is wonderful – but to expect the deep and meaningful experience that the author wishes for is to expect more than the play actually offers.  In fact I suggest that Samson by Julia-Rose Lewis, even at only 75 minutes (reviewed on this blog on May 12, 2015), and played by young actors, more successfully satisfies this kind of expectation.

All photos by Brett Boardman


Posted by Canberra Critics Circle at 9:22 AM