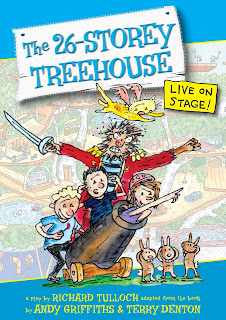 Writer, Andy Griffiths, and illustrator, Terry Denton have once again hit on the perfect recipe to enchant and delight young children with The 26 Storey Treehouse, a colourful, bright and fun-filled sequel to their runaway success, The 13 Storey Treehouse. With a collection of new and exciting adventures, Andy (Luke Carson)and Terry (John Shearman), accompanied by two other actors  and an obliging stagehand set out to  escape their bossy, uncaring parents and enter into a perilous world of Captain Woodhead (James Lee) and  his wooden  cutout band of nasty pirates, Gorgonzola, the cheese smelling, man-eating shark, puppeteered by the busy stagehand, the dangerous Maze of Doom and the devious Edward Scooperhands and his seventy-ninth scoop of icecream with a tricky twist, Versatile actor, James Lee,  revels in his various villainous roles, all of whom bear a striking resemblance to Hector Hautkop, an actor invited to join Andy and Terry on their adventures. But is he to be trusted?  Or is he nothing more than a termite in the tree? ﻿﻿
Richard Tulloch’s adaptation of the award winning book demonstrates his longtime and impressive expertise as a writer and adapter of plays for youth and the very young. Every element of successful children’s theatre has been included in this tightly scripted and fast-paced adaptation of Griffiths’ and Denton’s book. The young audience giggled and guffawed at the running underpants joke. Lavatory humour still delights the young. Slapstick moments have the audience breaking into spontaneous laughter and songs with lively actions have the kids clapping along with excitement. Mark Thompson’s bright, portable treehouse design captures the cartoon character of the storybook  and Nicholas Higgin’s lighting heightens the show’s moments of laughter, suspense, danger and mystery.  Katie Kermond’s choreography is simple and slick and the company of performers hurl themselves enthusiastically into this vigorously demanding, physically active and energy charged adventure for 6 to 12 year olds. Perspiration-soaked shirts at the close of the show are proof enough of the energy that Carson and Shearman throw into every action, every song and dance routine and every frantic chase.
Directed with attention-grabbing flair and non-stop business by CDP Artistic Director, Julian Louis, and Liesel Badorrek, The 26 Storey Treehouse remains true to the popular book, and the young audience remain rapt throughout the hour-long performance.


Only the anarchic nature of the message could come into question. Andy and Terry are driven from
their homes by seemingly uncaring parents, who neglect them or stifle their liberty. The audience eagerly  claps along to the lyrics of their rebellious song of freedom:


You can break every rule


When you live in a tree


A primary school teacher told me of the trouble she had had with one child who refused to behave after reading an Andy Griffiths’ story. One child in thousands, perhaps, but parents may object that their attempts to have children clean their teeth for two minutes, go to bed at a reasonable hour and clean up their rooms could succumbt to the subterfuge, implied in the subversive message .  In their defense, it might be claimed that the play merely expresses what kids think anyway, and it is only a story of two best friends with a passion to let their imaginations soar. Let’s not get too PC obsessive.
Anyway, one could hardly complain about the woman’s role in this adventure. Animal loving, plane flying, deep sea diving Jill (Freya Pagt)  is on hand to save the day and rescue Andy and Terry from pirates, sharks and the Maze of Doom. Feisty, clever and brave, it is Jill who saves the day.
There can be little doubt that the young audience loved the show, and I doubt that any will immediately run away from home. After all, in the end, after escaping the dangers of the big wide world, it seems that the age old message remains: “There’s no place like home, especially if it is a 13 storey, 26 storey or even a 52 storey treehouse.  That will be an adventure not to be missed when this imaginative company brings another Treehouse story to the stage.
Posted by Canberra Critics Circle at 10:02 PM