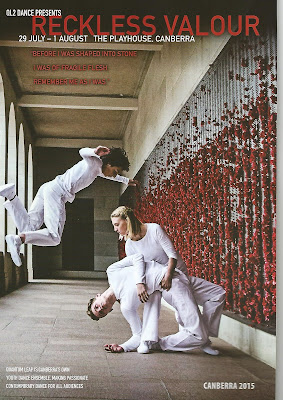 The Playhouse, Canberra until 1st August.

First presented by Quantum Leap in 2005 to commemorate the 90th Anniversary of the ANZAC landings on Gallipoli, and now revisited with an entirely new cast for the ANZAC Centenary, “Reckless Valour” remains a thoughtful, affecting and at times, deeply moving dance theatre work.

Six choreographers and five composers have contributed to “Reckless Valour” with Fiona Malone, Natalie Cursio, Jodie Farrugia, Rowan Marchingo, and Ruth Osborne, refining and reworking their original contributions, and with a new segment by rising young choreographer, James Batchelor, added for this production.

There are no solos, no stars, and while there is some disparity in the ability of individual dancers, this is of little consequence because each choreographer has embraced this disparity to achieve remarkably committed and consistent performances from each of the 32 young dancers who make up the ensemble cast, allowing each segment to achieve its intended effect to create a glorious emotional patchwork.

Each work is accompanied by an evocative soundscape provided by either Nicholas Ng, Luke Tierney, Warwick Lynch, Morgan Hickenbotham or Mark Webber, and each is supported by arresting visuals from WildBear Entertainment. Impeccable stage management adds immeasurably to the professionalism of the presentation.

The program is presented in two halves. The first half takes the form of homage to the Australian War Memorial.  Filmed segments, combining archival footage together with specially filmed sequences, are used extensively to set the tone and connect the three dance works.

Jodie Farrugia focusses on the “Pool of Reflection” to provide a thoughtful segment with suggestions of children at play contrasting with the ominous sounds of gunshots and helicopters. Endlessly scrolling names provide a compelling background for Fiona Malone’s “Roll of Honour” in which figures in monotone costumes march backwards in time.  This section concludes with Ruth Osborne’s superbly realised elegy, “Hall of Memory” in which Osborne employs mass sculptural images to encapsulate the grandeur and solemnity of the memorial.

The three works after interval are more diverse but no less compelling. James Batchelor’s “A road to nowhere” is a typically stark and arresting work. Performed to the sound of tramping feet, with the dark shadows of the dancers providing a backdrop, his blank-faced dancers clomp through intricate formations. One by one they abandon their footwear, until there is just a row of empty clogs on the stage.  A remarkably chilling allusion to displacement and dispossession, and an effective contrast to Rowan Marchingo’s optimistic “Faces of the Enemy”  which celebrates Australia’s cultural diversity. Nat Cursio ends the program on a thoughtful note with his work, “Lest We Forget” which questions our ability to learn from the past, and ends with the whole cast imploring the audience to “Listen”.

Ten years on from when it was first created “Reckless Valour” remains an eloquent exploration of our attitudes to war and a compelling example of the use of dance to illuminate difficult themes. It is also a shining example  of  what can be achieved through youth dance and why QL2 Dance is regarded  as a leader in this field, not only in Australia but internationally. Don’t miss this opportunity to experience one of its finest productions.


This review first published in the digital edition of "CITY  NEWS"  on 30.07.15
Posted by Canberra Critics Circle at 3:14 PM