The Art of Shakespeare Exhibition 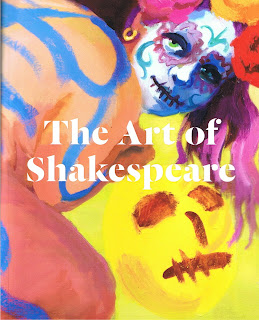 Art is about creation, intent, response and interpretation.

As David Malouf writes in the Foreword to the exhibition catalogue What interests Shakespeare is the working of the mind, an inner state.  When, on the other hand, painters and illustrators turn to his characters, what they tend to present is their external attributes….  This exhibition presents artists working as Shakespeare himself does, in the realm of atmosphere and suggestion.

Each work is thus an original creation in its own right, in response to a moment – often just a line – chosen by the artist in answer to John Bell’s invitation.  As you would expect from artists of this quality, not one work is a simple illustration, even if some titles quote the quote.

As they create in response to Shakespeare, each with their own idea of his intent, and showing the viewer their interpretation, so I found myself facing their creations, wondering about their intentions, and interpreting the ideas and emotions I felt in response.

Nick Vickers has hung the works in such a way that some brashly stand out, others are more discreetly hidden for you to come upon them unexpectedly close up, while the three Lady Macbeths form a triptych which build from her personal horror in Lynn’s Unmannerly Breech’d, through the evil intent of Jones’ Leave The Rest To Me and culminating in an abstract explosion of feeling in Cape’s I Am In Blood Stepp’d In So Far.  And then you see Lady Macbeth’s final mental collapse in Thomson’s sleepwalking scene, La Sonnambula.

Then you realise that it is The Witches who you could not avoid as you entered the space.  The works begin to take on lives of their own, like characters in a bizarre drama.

It was at about this point that I thought I should test out my reactions, so I sought out the most expensive artist, Garry Shead, whose Romeo And Juliet I thought I understood.  Having explained that I saw the two families not just shocked by the sensuality of the kiss and bare breast, but that they simply were unable to understand, and certainly not accept, the natural sexuality of the attraction between Romeo and Juliet.

Oh, no, explained the artist.  It was just the ballroom scene.  There’s only one family there, except for Romeo, and they are all horrified at his temerity at gatecrashing the ball, discovering Juliet and kissing her.  For Shead, it is a painting of one moment in one scene; I interpreted it as representing the core of the whole play.  We parted on highly amicable terms – that’s what art is all about.

I mentioned expense because all the works are for sale, with – through the goodwill of the artists and their respective galleries – a percentage being donated to Bell Shakespeare to support their outreach programs “looking for new ways to educate, collaborate and recreate”.

This exhibition, I believe, is an original approach, centred in artistic creation, to encourage philanthropy to support the arts.  It is also an Occasion – to mark the 25th Anniversary of the establishment by John Bell of the Bell Shakespeare Company, while it also could be said, to quote Malcolm concerning the traitorous Thane of Cawdor, that “Nothing in his [Bell Shakespeare] life became him like the leaving it”.

Whether that means we should see Peter Evans as an incarnation of Macbeth, who inherited the former thane’s title, I’ll leave to others’ interpretation.  As John Bell retires in the wake of directing the upcoming The Tempest (Sydney Opera House August 19 – September 18), maybe Prospero’s staff will receive more kindly treatment than in the play and be passed on to Evans without being broken.

The Art of Shakespeare will surely make a fitting farewell for the theatrical stalwart whose work I first saw in Henry V at the Adelaide Festival in 1964.  Though he may be leaving the tent – “just going outside and may be some time” – I suspect we’ll see more of John Bell before long, even if it’s only to present the next The Art of Shakespeare in a year’s time – I hope.


Posted by Canberra Critics Circle at 9:02 AM